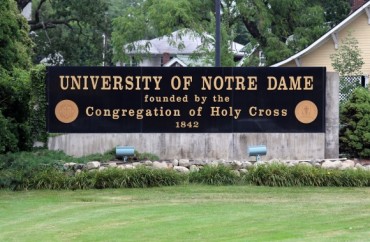 The University of Notre Dame student government recently reintroduced a once-banned pro-LGBTQ film festival to campus, prompting a mix of support, controversy and condemnation, including a petition denouncing the event with some 16,000 signatures.

The “GlobaLGBTQ+ Film Festival,” held during the first two weekends of October at the private, Catholic institution, showcased films such as “Chavela,” “Inside the Chinese Closet” and “XXY.”

The films spotlight coming out, questioning gender identity, and other pro-LGBTQ topics. One of the films, “XXY,” includes a scene that has been described as child pornography.

“I am disappointed at this decision of so many campus groups to sponsor a festival, or celebration, of a vision of human sexuality that cannot lead to a flourishing of love in marriage,” Shaun Evans, president of Students for Child-Oriented Policy, told The College Fix.

The non-sectarian Notre Dame student group advocates for traditional marriage and raises awareness about the harms of pornography.

The Identity Project of Notre Dame, a student organization that promotes human identity and sexuality in line with Catholic teaching, also expressed disapproval.

“Endorsed by the Center for Civil & Human Rights and occurring on a Catholic college campus, the GlobaLGBTQ+ Film Festival undermines what ought to be its mission — the promotion of the dignity of the person,” Molly Weiner, a senior and member of idND, told The College Fix. “These films depict the atrocity of child pornography and blatantly advocate against the Catholic Church’s teachings on human sexuality.”

TFP Student Action also circulated a petition to stop the festival that garnered more than 16,000 signatures.

But backers of the GlobaLGBTQ+ Film Festival included public support from 20 university departments and programs at Notre Dame, such as the Center for Civil and Human Rights, the Department of Philosophy, the Gender Studies Program, and the Department of Anthropology.

The Department of Philosophy provided a statement about why it supported the event.

“The department helps to sponsor a wide variety of events on campus which it hopes will enrich the intellectual lives of students and other members of the university, and this film festival is no exception,” professor and Chair Jeff Speaks told The College Fix.

Yet if campus leaders were proud of the film fest, they did not seem to boast of it publicly.

While some of the supporting organizations advertised the festival’s full schedule on their websites, no related posts appeared on the websites or Facebook pages of the student government or the university’s LGBTQ group, PrismND.

It is unclear whether the GlobaLGBTQ+ Film Festival will become an annual event at Notre Dame.

The first iteration of the film festival, the Queer Film Festival, appeared at Notre Dame in 2004. As a Catholic institution, the university’s decision to host the event stirred controversy, since the Catholic Church teaches that sexuality properly understood must be directed toward the union of a man and woman in marriage. In the official student handbook of the university, Notre Dame echoes this teaching.

In 2005, then-bishop of the Fort Wayne-South Bend Diocese, John Michael D’Arcy, denounced the event, calling it an “abuse of academic freedom.” The university acknowledged the bishop’s critique but refused to cancel the festival, although it was renamed twice between 2006 and 2008.

In 2009, it was quietly discontinued under current University President Father John Jenkins. But now it’s back, the first installation of the film festival in nearly a decade.

An article about the event in The Observer, the university’s student newspaper, reported that the festival is part of an effort to promote “inclusivity” on campus.

Sophomore Anne Jarrett, the student government’s Title IX commissioner and one of the festival’s coordinators, told The Observer that she hoped it would “start conversation and introduce some of these issues to our campus.”