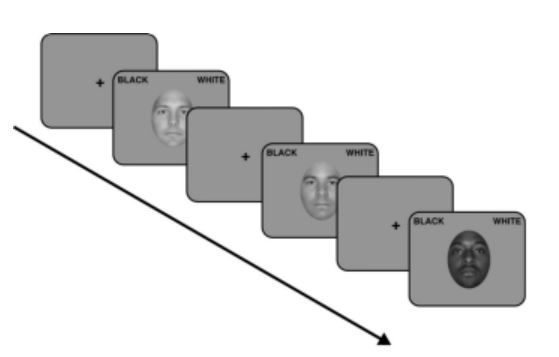 That’s the bottom line of the study, but you know academics – they love to use jargon and mumbo-jumbo to couch their findings in esoteric notions. But the long and short of it is this: the study found white conservatives inherently want to keep black people in their place.

“A person’s race is often thought to be clear-cut and fixed,” Amy Krosch, a doctoral student in New York University’s Department of Psychology and the lead author of the paper, told campus officials. “However, our research suggests that the perception of a person as black or white is related to one’s political views and beliefs about equality.”

So if you show a white conservative a picture of mixed-race individuals such as Tiger Woods or Barack Obama, they’re more likely to say they’re black, as opposed to saying they’re white – an indication of what Krosch described as the link between political views and beliefs about equality.

Here’s the academic-speak to that end:

Their results showed that, indeed, among conservatives, “opposition to equality” was a powerful predictor in the categorization of mixed-race faces as black rather than white. However, this was not the case for “group-based dominance.” “These results suggest that conservatives may be categorizing mixed-race faces as black to justify racial divisions that are part of the historical legacy of the social system in the United States,” the researchers wrote. …

“It seems reasonable to conclude on the basis of these results that bias in the process of racial categorization may reflect, among other things, the motivation to defend and uphold traditional racial divisions that are part of the historical legacy of the United States,” the researchers concluded. “Conservatives exhibit stronger system justification tendencies in general and are presumably more sensitive than liberals to challenges directed at the legitimacy or stability of the social order, with its attendant degree of racial inequality.”

Bottom line, universities love spending their time and our taxpayer dollars trying to prove the white man is racist.