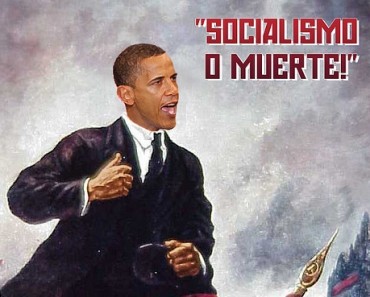 Both Barack Obama and Hugo Chavez – political leaders who use government handouts to amass support and power, control the media to bolster their image, and blame the rich for everything – have once again seized power in their respective countries.

In the face of economic recessions, Obama and Chavez were re-elected recently with the help of a growing number of devout followers who saw the men not as presidents, but as providers and saviors.

The results show how a political party can buy voters and swing an election. What’s worse, America is headed in the same path as Venezuela, which today is worn down and depleted of its resources, and its frustrated citizens are caught in a rut of stunted progress and a stagnant economy.

“Obama is implementing the same ideas that are implemented in my country,” said Tomás, a Venezuelan American citizen who currently attends college on the East Coast. “People are ignorant of the implications of voting for Obama, which is absurd when they have clear evidence in Venezuela of what these ideologies can do. It might take a long time to happen here in the U.S., I don’t know. But the outcome is always the same – it will bring a country to ruins.”

In Venezuela’s case, in early October its residents re-elected their socialist president, Chavez, to the utter devastation of millions of Venezuelans across the globe.

But he was elected democratically. Venezuela even implemented a brand new electronic voting system that was deemed fraud-free by the U.S.-based Carter Center, which has observed Venezuelan elections for decades.

How can a country faced with horrific crime, a stagnant economy and extreme poverty vote for more of the same for the next six years? The real fraud happened before the election.

Chavez used the millions of Venezuelans dependent on government aid programs, the resources of the state at his disposal, and control over the country’s mass media, to sway the outcome of his election.

His efforts were wildly successful, as a majority of Venezuelans freely chose to continue living under the socialist regime, complete with its astronomically high murder rates and extreme poverty, in exchange for government handouts.

Eight million Venezuelans are directly dependent on the government for either their income or for substantial handouts, according to a study by The Cato Institute. Coincidentally or not, Chavez won by earning 8 million votes.

Today in the United States, 67.3 million Americans depend on the government for housing, food, income, student aid or other assistance, more than enough to turn the tide of an election.

The 6 million Venezuelans who voted for opposition candidate Henrique Capriles have found themselves sorely outnumbered by a society so dependent on government that even the utter devastation of their country around them will not sway their support of Chavez.

I had the opportunity to visit Venezuela in February to get a first-hand glimpse of what a once-bright star of Latin America looks like after ten years of socialism under Chavez.

Things are bad over there. Children are murdered and kidnapped in the streets. Skilled and educated parents are forced to watch their families starve because the government crushed any opportunity for them.

And still, Venezuelans voted for Chavez. Venezuela’s plight offers Americans valuable lessons about what happens when a government spends unsustainable amounts of money in an effort create dependency and therefore garner support.

Chavez expropriated a majority of Venezuela’s industries, businesses and private property, all under the guise of “making the rich pay their fair share.”

He implemented socialized healthcare and severely limited the freedom of the press. He also began a campaign that was akin to some sort of government-sanctioned version of the Occupy Wall Street movement. Rhetorically, he turned the upper class into the enemy, and opposed private interests and entrepreneurship.

No one who understands the situation is really happy with the results – a once-vibrant Venezuelan economy that is now a mire of government bureaucracy and inefficiency.

But Chavez maintains his fan base.

I attended one of his rallies in the capital city of Caracas. A sea of people dressed in red, some even costumed like Che Guevara, were shouting: “We are nothing without Chavez!” They marched to militaristic music blasted through the whole city singing, “We will conquer!” Venezuelan radio stations were not allowed to return to their regular programming until Chavez’ speech was over, five hours later.

David Uzcategui, one opposition leader, ran for mayor of Baruta, a powerful suburb of Caracas. He thinks that excessive welfare has turned Venezuela into a country of dependents.

“The government has dedicated itself to a policy not of expropriations, but of confiscations – of businesses, of factories, of companies, of land, of commercial centers – but without any return,” he told me in Spanish. “They have been confiscated for the ‘collective well-being.’”

Twenty years ago, he pointed out, Venezuela’s economy thrived on oil exports and foreign investment under a democratic and generally free market government.

“Never have we had, in the history of Venezuela, so much stability and gain from oil…and never have we known or reached oil revenue at such high rates, that could be used to construct highways, roads and increase private investment,” Uzcategui said. “But it has only been used to increase bureaucracy and populism, and not to generate employment and opportunity.”

In the United States, in the midst of one of the greatest recessions the country has ever faced, staggeringly high unemployment rates and a faltering market, Americans voted for Obama.

In the same spirit as Chavez’ supporters, they voted for more government spending, more handouts, and more welfare under the theory that somehow, if we just redistribute wealth, prosperity will follow.

The real problem, as Obama convinced the American people, just like Chavez did, is the rich. And when we can stamp out the ability for the brightest and the best to earn the most income, we will finally achieve equality.

Yes, we are headed down the same slippery slope as Venezuela. In fact, we’re not just headed there – we’re running there at lightening speed.

We are getting close to the point where government dependents may have such electoral power that those independent from such aid may never be able to turn an election in their favor again, and the government facilitating the handouts will be impossible to overturn democratically.

But we are fortunate, in a dark way, because Venezuela is already a few steps ahead on the same path. We get the chance to see the horrific devastation of a once-prosperous country before it happens on our own soil. And maybe, just maybe, we’ll be able to stop it before it is too late.

Fix contributor Regina Conley is a student at Catholic University of America.