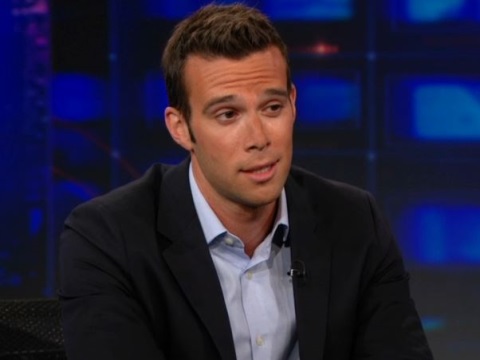 WASHINGTON D.C. – President Barack Obama’s former speechwriter channeled Obama’s rhetorical tactics recently when he told a roomful of college students that people who know the least about the Affordable Care Act oppose it the most.

Jon Favreau took an aside from talking about his speechwriting career to sell the 300 person-audience at George Washington University on the Affordable Care Act, a.k.a. Obamacare, just a few hours after Sen. Ted Cruz (R-Texas) finished up his 22-hour filibuster against the law.

“I think there’s no easier issue to scare people on than healthcare and that was true long before Obamacare and the Affordable Care Act,” Favreau said.

He said the reason most people oppose the Affordable Care Act is because people are “susceptible to billions of dollars of advertising telling them Obama’s going to take away their health care and a weird Uncle Sam with tweezers is going to inspect you.”

The Pew poll in question, however, tells a different story.

PewResearchCenter released a poll this month that said disapproval on President Obama’s health care law has reached a new high, but it does not say that it is because people do not understand the law.

People aware of the law are in the majority, but for the first time ever American disapproval of the health care law has also reached a majority.

Moreover, several people who know a lot about the law and are in opposition to it voiced their dissent over Favreau’s statement to The College Fix.

“Three colleagues and I wrote a carefully researched and extensively documented book called Why ObamaCare Is Wrong for America. We have been studying and analyzing this law and its implications for years,” Grace-Marie Turner, president of the non-partisan Galen Institute, said in an email. “We understand it as well as anyone in Washington and are extraordinarily concerned about the damage it is doing and will do to our economy and health sector.”

Michael Cannon, director of health care policy studies at The Cato Institute, offered statistics from a Gallup Poll that stand in opposition to Favreau’s claim.

Fifty-five percent of Americans who say they are most likely to disapprove of the law are also the ones who know the most about it, according to Gallup. The poll also said that one-in-three young Americans from age 18-34 are least familiar with but most optimistic about the law.

Derek Dye, the executive director for the Doctor Patient Medical Association, argued that Favreau’s sentiment is backward because the public mostly identified Obamacare as the talking points that helped create support for the law.

“Obamacare is much more complex than those talking points make it sound, and as people learn more about the law public opinion has only gone down,” said Dye, 25.

Dye said that what most Americans are not sure about are the final regulations governing the law and how much individuals will pay for their insurance rates. Both the regulations and the expected individual insurance rate costs are relatively unknown to the public just one week before the health care exchanges will go live on Oct. 1.

Favreau, however, is not deterred.

He said there will be mistakes and bumps in the roads with the health care law’s implementation, but he said it’s already working.

“I think it has to be a constant sales effort by the White House,” he said. “It’s going to be harder in states that refused Medicaid expansion.”

The College Democrats sponsored his talk.