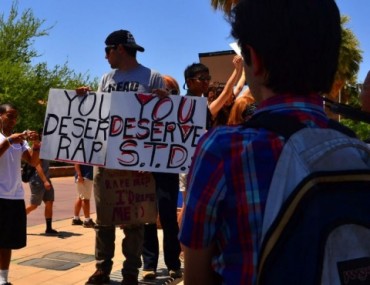 One University of Arizona student thinks so.

Dean Saxton, or better known on campus as “Brother Dean,” does not hold back when inflicting these opinions and beliefs on fellow students on their way to class, as this young man has called himself “the Preacher of righteousness to the city of Tucson.”

Starting a couple years ago and continuing this semester, it is not unusual for students to learn they’re a slut, whore, sinner and so on, according to this campus “open-air preacher.” Saxton stands near the student union, an area of high traffic, and will yell at students, often young women who participate in Greek life.

One of his most famous displays was a sign that stated: “Sorority girls deserve rape.” On this issue, Saxton is quoted in the Daily Wildcat as saying: “I think that girls that dress and act like it … they should realize that they do have partial responsibility, because I believe that they’re pretty much asking for it.” Often, he accompanies his visual and verbal sermons with a T-shirt that also says “You deserve hell!” or “Virgin Pride.” He has quite the reputation on campus: most everyone knows who is being referred to when the name “Brother Dean” is mentioned.

Asked by The College Fix whether his approach would be supported by Jesus, Saxton said in an email: “Jesus and the bible completely agree with my approach. I don’t always yell or name call but when needed I use it.”

While many students have said they do not feel as though Saxton is personally harassing or verbally assaulting them with his words, others say they do. Several students have complained to the Dean of Students Office about Saxton’s actions, prompting university officials to come forward and say that while his words are inappropriate and uncalled for, his speech is protected.

Specifically, the Dean of Students Office released this statement earlier in the spring to The Huffington Post regarding the issue:

“The University of Arizona does not endorse or condone the message of the campus speaker – in fact, it considers it to be vile and repugnant. However, because universities in particular are bastions for free speech, even when it is offensive, the University of Arizona will uphold the right of this speaker and all others to engage in constitutionally protected speech on its campus. Should the University receive complaints or otherwise become aware of allegations of misconduct that fall outside the realm of constitutionally protected speech, it will investigate and deal with them as appropriate.”

So students have taken matters into their own hands.

In February, one student organized a campus-wide “Harlem Shake” video recording during the middle of one of Saxton’s sermons. The event was coordinated through a simple Facebook event, and ultimately included hundreds of University of Arizona students. The video went viral.

The same day, another group of students clothed themselves in dress to appear as angels, and held large sheets, decorated with peace signs, that said: “Peace” and “Paz” so as to block the campus from any exposure to Brother Dean. This display was put on more than once.

University police have also been contacted multiple times in response to students who try to tear down Brother Dean’s signs.

Frequently, students gather around his sermon and challenge his words, as well as question his beliefs, and the campus has become braver in its ways of testing this student’s harsh words. Perhaps the student body backlash has started to take hold – Brother Dean has not been out as much this semester.

Dialogue and debate – what a college campus is all about. Colleges are designed to be areas of diversity and provoke thought amongst young adults. College campuses are some students’ first exposure to the differing viewpoints in the world. The First Amendment to the Constitution states: “Congress shall make no law respecting an establishment of religion, or prohibiting the free exercise thereof; or abridging the freedom of speech, or of the press; or the right of the people peaceably to assemble, and to petition the Government for a redress of grievances.”

These constitutional rights don’t end when students step foot on campus, like it or not. I don’t agree that sorority girls are sluts who deserve rape, but I defend Brother Dean’s right to say it.