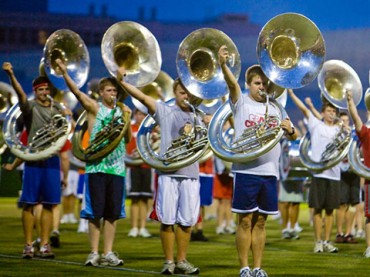 Last summer The College Fix’s Greg Piper reported on the “carnival of sexual horrors” that is — re: was — the Ohio State marching band.

The band director, Jon Waters, was canned from his position for “sexual assault” … for his failure “to adequately stop” the “sexualized culture” within the band.

This was amid claims the band had “been like th[at] for decades.”

Waters sued the school for lack of due process and gender discrimination; a U.S. district judge dismissed the former, but allowed the latter back on April 24.

Waters alleged in his lawsuit that female OSU employees in similar situations were allowed to keep their jobs and correct any concerns the school had. That wasn’t the case for Waters, he believes, because of his gender.

“As for Mr. Waters’ sole remaining claim, that he was terminated because he is a man, we look forward to providing the factual support to enable early dismissal of that claim as well at the next opportunity presented by the proceedings,” OSU spokesman Chris Davey told the Associated Press.

Waters’ attorney, David Axelrod (not that David Axelrod), said he was “pleased” with the judge’s decision to allow the lawsuit to proceed.

“We’ve said all along that Jon was treated very unfairly by Ohio State, and we’re anxious to start talking to the witnesses and getting to the truth,” Axelrod told the AP.

The Examiner’s Ashe Schow notes that Waters’ firing “conveniently coincided with an investigation by the Department of Education for Title IX investigations.”