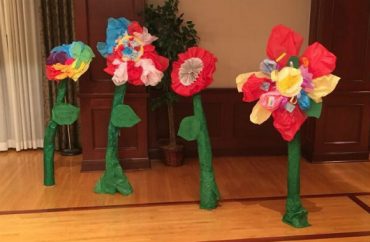 When students at public universities in Ohio learned that anti-feminist firebrand Milo Yiannopoulos was coming to their campuses earlier this month, they started organizing.

But unlike their peers at schools across the country, their aim wasn’t to shut down or continually interrupt his speaking engagements.

Instead, they sponsored competing events intended to promote their own ideas.

Miami University of Ohio students organized not one, but two events. They decorated a room in the Student Center with child-sized “flowers” for an event titled “Growing a Garden of Love.”

The flowers appear to be made of colorful tissue paper, wire and glue, as evidenced by photos obtained by The College Fix. According to The Miami Student, the decorations were assembled in the Miami Women’s Center over the past week. Students “helped themselves to free food, made small art projects at tables and listened to students and faculty share poetry, memoir and other writing” at the event.

“Growing a Garden of Love” was co-organized by the Women’s Center, Office of Diversity Affairs, Miami King Library and the Diversity Affairs Council, which is one of nine councils under the student government.

The flowers also appeared at a Monday night lecture by Miami alumnus Kevin Samy, who spoke about “white supremacy’s undue influence in the 2016 election – and the oval office [sic],” according to its Facebook event page. The Miami Democrats helped bring Samy to campus. His lecture was “packed to the gills with students, faculty, and community members” as Samy “called on students who oppose the ideas of the alt-right to be proactive in their dissent,” according to The Miami Student, which said about 150 people attended. (Yiannopoulos is technology editor at Breitbart, which is popular with the so-called alt-right.)

Samy told the audience not to use an “outburst” to protest ideas they dislike, but to plan their responses: “It should not be dissent for dissent’s sake.”

Lecture organizer Olivia Vandervoort, a political science student, credited Samy with helping “a lot of people think through what has been going on” during the election season.

Student Lana Pochiro, an intern at the Women’s Center who helped organize the counter-events and design the flowers, did not respond to Fix requests for comment.

She told The Miami Student that her “hope is to unite people who say, ‘No, we do not accept this.’ We want to educate others and develop real strategies.”

MORE: Milo debate canceled because his counterpart is too expensive

Elsewhere on campus, Yiannopoulos spoke to about 250 people about campus free speech, radical Islam, the recent stabbing at Ohio State University by a Muslim student and the “Trumpen Reich,” the paper reported.

His lecture only had one major interruption, when student Mickey Myers yelled from the audience “why can’t we ask you questions?”

When Yiannopoulos asked for Myers’ question, she accused him of not having “an open debate” because he had a microphone, according to The Miami Student. Myers then led a procession of students out of the room “through jeers.”

As a public university, Miami recognizes it is possible to reject ideas as inconsistent with our values, while at the same time acknowledging the right for those ideas to be publicly expressed.

MORE: LSU tries to stop Milo based on possible ‘incitement of violence’

Yiannopoulos drew a crowd of about 300 at Ohio University the previous Friday, where the Multicultural Activists Coalition countered his message by hosting a “Pride Pachanga.”

The event description invited people “of all walks of life” to “dance and eat some food while celebrating culture and diversity!” It also featured performances and information about “different organizations and groups on campus!”

The director of the campus LGBT Center, delfin bautista, told campus newspaper The Post that those who attended could “just share who they are” through food, crafting and information about themselves.

According to The Post, the only interruptions at Yiannopoulos’s lecture Friday night event came from his own supporters. (Bautista also attended.)

The lack of protest led him to call the university “low-energy,” a reference to a common insult by President-elect Donald Trump.

He said he came to Ohio University because of the controversy that followed pro-Trump messages written on the university’s graffiti wall in the past year.

Yiannopoulos told the Post that he is “more significant than Trump,” a politician he supports, because Yiannopoulos will “be around in 30, 40 years talking about stuff that actually matters.”