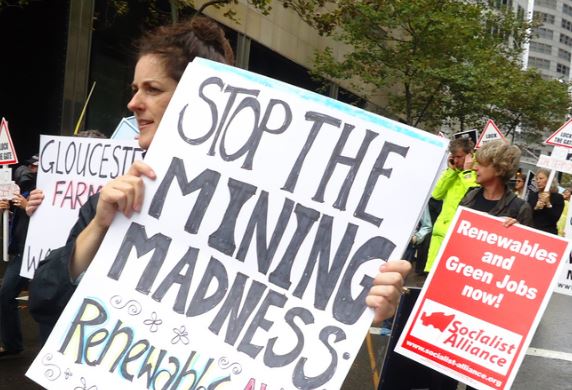 Lately Colorado, considered by some the nation’s hotspot for the natural energy drilling boom, has become obsessed with making frac’ing sense, with environmentalists and pro-business groups alike vying for supporters.

Much of that battle is played out at the state’s public universities.

Case in point – the University of Colorado at Boulder – where several green and fossil free environmental groups during the spring semester offering workshops and speakers to encourage students to join the anti-fracking and environmental justice movement.

One such workshop was dubbed “Stop the Frack Attack” and sponsored by StopTheFrackAttack.org. The discussion group “Fracking-A Messy Business” was hosted by the Assembly for Sustainability and Equity group.

Meanwhile, Colorado Governor John Hickenlooper – who famously drank fracking fluid to prove it was harmless – gave a presentation on “Frac’ing Sense” at the university.

Hickenlooper is among those who aim to counter the sustainable proclamations and green peace efforts in Boulder and present some frac’ing truth.

He is not alone. Professors, in fact, have joined his cause, most notably from the Colorado School of Mines, where educators there work to inform the masses on frac’ing, and counter the argument it’s harmful to the environment.

Dr. Will Fleckenstein, BP adjuct professor at Colorado School of Mines, specializes in unconventional reservoirs, and actually worked as a roughneck on drilling rigs. He is quick to point out that, by using best practices, frac’ing is actually safe and effective.

Backing him up are groups such as the Colorado Women’s Alliance, which on Wednesday screened “FrackNation,” a pro-drilling film, at a downtown Boulder hotel.

Not to be outdone, the anti-frac’ing film “Gasland 2” was shown Wednesday night at CU Boulder by nearly two dozen environmental groups, including the Sierra Club and New Era Colorado.

As the debate in Colorado rages on, Debbie Brown, Director of Colorado Women’s Alliance, told The College Fix it was important for this event to bring insights to women about these issues.

“Women in particular often fall prey to an extreme environmental agenda, and it’s important to offer a fact-based educational documentary that offers a different view on these important energy issues, like the film, FrackNation,” Brown said.

She added: “America is more secure when we produce our own safe, affordable, clean and abundant energy. Our energy entrepreneurs should be encouraged to innovate and explore new development that will decrease our need for foreign dependence and provide economic prosperity for American families.”

Brown’s sentiment about informing communities about frac’ing is shared by students who will be working in the oil and natural gas industries.

Carlton Healy, 22 and recent graduate from Colorado School of Mines with a civil engineering specialty, has experience in the design of hydraulic fracture stimulations and will be working at a petroleum company full time.

“Conventional oil and gas reservoirs are becoming harder to access thanks to engineering and geo-political challenges,” he told The Fix. “Thus the prospect of developing domestic unconventional reservoirs is becoming more and more viable thanks to hydraulic fracture stimulations.”

“Through hydraulic fracture stimulations, which are economically essential to these ‘new’ reservoirs, the United States could become much more energy independent by producing petroleum domestically,” Healy added.

Healy said the term “fracking” is incorrect when referring to the industry.

“Frac’ing, not fracking,” Healy said. “There’s no ‘K’ in Hydraulic Fracture Stimulation; it’s a pet peeve of mine and others in industry.”

Colorado School of Mines’ Fleckenstein’s gave a presentation in December of 2011 in Brussels for The Atlantic Council and Goldwyn Global Strategies workshop called “Best Practices in Exploration: Drilling, Casing and Cementing.”

The presentation included data on the process of horizontal frac’ing drilling practices and their effectiveness at retrieving shale deposits.

Essentially the process of frac’ing is to start with drilling vertically and then change the direction by rotating the bit with a downhole motor, or a rotary steerable system. This then opens up the shale reserve to multiple access points in which the resource can be obtained.

Chemicals that are blended together with sand and water are inserted into the perforations, or drilled fractures, that were drilled in the well. Natural fractures begin to form from the perforations, which are kept open by proppant, or padding chemical.

Continuous drilling happens with the perforating gun in stages. The natural pressurized gases are monitored throughout the drilling. The chemicals and their fluids are then retrieved to begin the actual drilling of shale.

David Neslin, director of Colorado Oil and Gas Conservation Commission, has stated that “to the knowledge of the (commission) staff, there has been no verified instance of harm to groundwater caused by hydraulic fracturing in Colorado.”

Meanwhile, anti-fracking and environmental justice movement groups continue to insist the harm is real and catastrophic, and they’re recruiting students to grow their ranks.