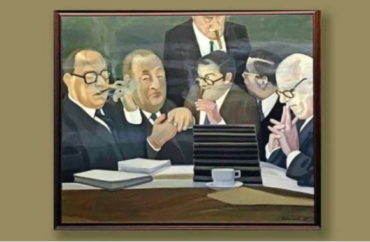 A painting of old white men smoking cigars by acclaimed contemporary Dutch painter Rein Dool has been taken down at Leiden University in the Netherlands, reportedly the result of a complaint by a female grad student.

Dutch News reported that the painting, which depicts university board members from the mid-1970s, “was taken off the wall following a remark by political scientist Elina Zorina on Twitter, suggesting the painting needed an ‘ironic or critical’ explanatory note.”

Zorina is listed on the university’s website as a PhD candidate at the Institute of Political Science.

The painting’s removal was documented by Joanne van der Leun, a professor of criminology and dean of Leiden Law School.

It “remains in the room facing the wall while a decision is taken about what to do with it. The university has also said the removal was not done officially,” Dutch News reported.

The removal of the painting prompted plenty of pushback.

He calls it “one of his best works.” The 90-year-old painter Rein Dool is still proud of the painting he made in the mid-1970s of the board of Leiden University: six serious-looking men, fat cigars in their mouths. For years it hung on the wall of a meeting room, but it was removed at the end of last week. The painting shows, among others, Dolf Cohen, a former rector who survived the war by going into hiding. …

Rein Dool finds the removal of the canvas “incredibly narrow-minded”. He has made a picture of the time, he says. “That executive council smoked like a heretic, that room was blue with smoke. I’ve been there several times and signed that board as I’ve seen it.” He finds it “very strange” that no one from the university has called him.

But, says a spokesperson for Leiden University, no decision has yet been made about what will happen to the painting. Since 2011, there have been comments and complaints about the painting every year, according to the university. This is mainly due to the room where it hangs: a small space, which would make the image of the five men even more dominant. Complainants feel ‘unrepresented’ by the work.

Commenters on Twitter also criticized the decision to remove it.

“Dolf Cohen, famous historian and rector @UniLeiden 1972-1976, is portrayed in this painting. He now turns his back to Leiden,” one commenter said.

Said another: “I’m sorry but as a Jewish student in your university, I find this both counterproductive and disrespectful. The demand to remove the painting without knowing the context disrespects the memory of a dean who survived one of humanity’s great tragedies and should be apologised for.”