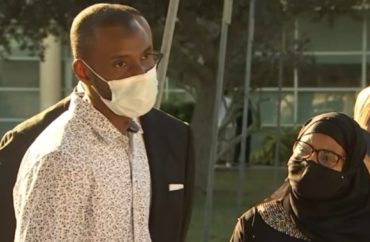 Their attorney has announced an investigation

The parents of a Florida Institute of Technology student want to know why police shot and killed their son who was chasing students around with a knife. Law enforcement also suspected the male student of assaulting several women.

Police shot and killed Alhaji Sow on December 3 after he “was reportedly armed with a knife and assaulting students around 11 p.m. [December 3],” according to WSB 2. “Witnesses said he went into a residential building on campus.”

He ended up dropping his knife and grabbed a pair of scissors, which he held when he tried to attack local cops.

“During the confrontation, police said Sow lunged at an officer, which led to a police officer and a campus security officer shooting at him,” WSB reported several days later. “Officers attempted lifesaving measures, but Sow died at the scene.”

The news station said the family’s attorney wants to know why cops did not use a non-lethal option instead of a firearm. Attorney Greg Francis said the response by the university is being investigated. He is a personal injury attorney based in Florida.

Francis said Sow “posed no threat to other students” according to WSB 2’s paraphrasing of his comments.

That narrative contradicts what the Melbourne Police Department has said in its timeline of events. A Melbourne police officer shot Sow, not a campus cop.

“Sow was acting erratic, was in the area on foot, and attacked multiple students on campus,” the police department said.

He had a “physical struggle” with a “female friend” around 10:30 pm. Campus security were dispatched to deal with a man, presumed to be Sow “battering another female.”

Sow also “attacked a female by punching her several times” according to police call records.

Witnesses reported Sow “vandalizing cars” before he ran into a dorm building and “punched [a male student] several times.”

The violent Sow then ‘entered Campbell Hall and confronted two other students. He pushed one student who retreated into a dormitory room.”

“Sow was holding a pair of scissors when he confronted a second student in a hallway,” the police department reported. “The second student quickly ran into another room and locked the door.”

He crouched down in a room before attacking the police and ultimately getting fatally shot.