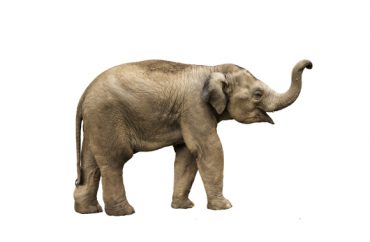 Back on March 25, South Asian students at Penn State celebrated Holi, the Hindu “festival of color.”

As part of the festivities, an elephant was brought to campus as the animal “play[s] an important role in Hindu religious ceremonies,” according to Universal Society of Hinduism President Rajan Zed.

However, the elephant’s appearance did not please at least a couple of PSU undergrads.

According to the Daily Collegian, students Kevin Cali and Andreas Haggiandreou started a petition on Change.org to implore Penn State President Eric Barron to “cease all live animal performances” on campus.

The petition reads “This is not the first time Penn State has sponsored such abuse. These animals are brought here for no educational or other beneficial reason; they are brought here solely for entertainment purposes.”

“Hindus traditionally loved, respected, cared for and looked after the welfare of the elephants and other animals,” he said.

Zed said he commended the efforts of the Penn State South Asian Student Association for sustaining Hindu culture and religion at Penn State, and thanked President Eric Barron for supporting the Holi festival.

“Awareness about other religions thus created by organizing festivals like Diwali and Holi on university and college campuses would help make nation’s students well-nurtured, well-balanced and enlightened citizens of tomorrow,” he said.

For their part, Cali and Haggiandreou allege the elephant was mistreated during its visit:

According to [the] change.org petition created after the event, this elephant was forced to stand for several hours in a confined area without water, fed an unnatural diet of doughnuts and marshmallows and poked with sharp bullhooks in order to bring it closer to the crowd of spectators. …

Haggiandreou said both he and Cali observed the event for a while before deciding to ask the handlers questions, but only one of the two handlers would answer.

“He was not pleased with us asking questions,” Cali (sophomore-animal science) said. “He was very condescending in his answers.”

You can be the judge, based on Haggiandreou’s YouTube video of the elephant’s (named Beulah) visit:

I don’t know about “condescending”; it seems to me the handler is joking around but then starts to get a bit irate at the students’ constant badgering.

It’s a bit tough to take the students seriously when, in response to the handler asking “Does it look like she (Beulah) is having a real rough time?” they say “Yeah, it kinda does.” (Beulah is just standing there munching on grass — around 1:45 in the video.)

Cali and Haggiandreou then engage in some cultural insensitivity by lecturing students who were part of the Holi celebration:

“We had a holy celebration,” a student responds. “In our culture it’s a big thing.”

“Yeah, but why did she have to come?”

“Elephants are a big part of Indian culture.”

“Do you think it’s fair to the elephant?”

Now, how about that — a couple of white guys “Hindu-splaining” to South Asian students how Holi should “properly” be celebrated.