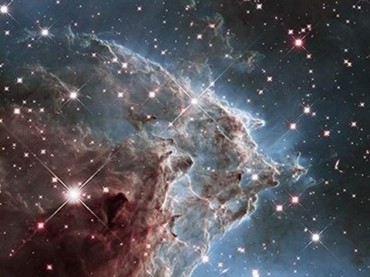 A physics professor at the University of Oklahoma who often spends his time studying smashed subatomic particles at the Large Hadron Collider at CERN laboratory in Switzerland has another hobby – smashing the notion that all scientists believe the universe was created by some sort of cosmic accident.

Dr. Michael Strauss has given some iteration of a lecture he’s titled “Scientific Evidence for the Existence of God” to students and peers at universities across the nation for nearly 15 years, including at Stanford, UT Dallas, UC Santa Barbara, and most recently Thursday at the University of Missouri-Columbia, where he said observable and testable scientific evidence points to a “designer who cares about humanity.”

This is coming from an experimental particle physics expert who also says scientific evidence shows the universe is 14 billion years old, and that it was created through a so-called “big bang” – which many people also hear from the likes of atheist and agnostic scientists.

But Strauss, also known for his knowledge and expertise on the Higgs boson “God Particle,” told his audience of roughly 200 students and professors who packed a campus auditorium to hear him speak that the discoveries of modern science give abundant evidence for the existence of a transcendent, intelligent designer who created the universe and has a purpose for humanity.

A caveat Strauss presented during his talk was that he wasn’t there to declare science could prove the existence of God, either. But he noted this subject is not settled science. It’s relevant, hotly debated, and worthy of discourse – citing Dr. Stephen Hawkin’s 2010 book “The Grand Design” to illustrate the topic is still under review by some of the greatest minds on the planet. “Bringing in speakers like this demonstrates the university’s mission of free and open intellectual discussion,” said University of Missouri history professor Darin Tuck, a faculty advisor to the Graduate Christian Fellowship, which hosted the event along with other Christian campus groups, such as Cru.

During his talk, Strauss essentially argued that the scientific evidence for the existence of God could be found by studying the origins of the universe, the design of the universe, and what Strauss called the “rare Earth hypothesis.”

In historical times, he said, all scientists believed in God, and it was only more recently, within the last 200 years or so, that science based on the assumption there is no creator has dominated the field.

But in 1929, Edwin Hubble discovered the universe was expanding, leading to the Big Bang hypothesis. Other modern experiments have also supported that theory, such as the temperature of the universe and the formation of elements.

“If everything in the universe came into being, then the cause of the universe must be transcendent, not a part of this universe,” Strauss argued. “Science kind of stumbled onto something that the Bible declared long ago … that the universe had a beginning.”

Strauss also brought up evidence for the existence of God by citing the apparent design of the universe, noting the amount of matter in the universe, the strength of its strong nuclear force, and the formation of carbon is so finely tuned that if any of these parameters were modified in the slightest, human life could not exist. Strauss stated there are about 100 similar finely tuned parameters.

Strauss’ third point delved into what he called the “rare Earth hypothesis.” Strauss detailed what it would take to for an earthlike planet to form by chance, a planet capable of sustaining not only bacteria, but higher life forms, such as those found in science fiction stories. (Think Class M planets from Star Trek.)

He highlighted how Earth is unique, with its moon, sun and solar system perfectly aligned to allow life to survive.  Few if any planets have a large moon in orbit around it to help provide just the right atmosphere. Few if any planets have a neighbor such as Jupiter, which is so large its gravity sucks into it potential threats to Earth, such as comets and asteroids.

In fact, there are 322 such parameters needed for a planet capable of sustaining intelligent life to form, and the probability for occurrence of all 322 parameters to develop by chance is 10 to the minus -282.

“It is unlikely that Earth could ever be duplicated,” Strauss said Thursday.

During his talk, Strauss included many quotes from atheist or agnostic scientists, those who do not believe in God, but still acknowledged the possibility of a higher power at work due to their observations:

Paul Davies: “If physics is the product of design, the universe must have a purpose, and the evidence of modern physics suggests strongly to me that the purpose includes us.”Superforce, 1984

Paul Ruben: “The biggest problem of the big Bang theory is philosophical, perhaps theological: What was there before the Big Bang?” Nature, 1976

In an interview before his talk at the University of Missouri, Strauss told The College Fix that his goal is to prompt listeners to question what they think they know – which is at the heart of scientific inquiry.

“I hope to get people to think,” he said. “To think in some new ways they haven’t thought before.”

“I have a passion for trying to understand what is really true,” Strauss added. “In this area of science we are searching for truth about the universe. Christians believe in a God that demonstrates truth. There should be some correlation, so it is important to investigate what that correlation looks like.”

When asked about his expectations for the night, “I always like honest questions,” he said, acknowledging people don’t always agree and that he receives opposition from both sides, science and religion.

“Frank dialogue is good, as long as it’s civil,” he said. “But I have thick skin.”

College Fix reporter Michelle Reed is a graduate student at the University of Missouri.