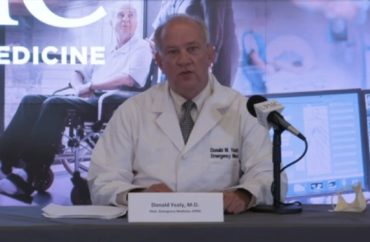 A month before the start of widespread coronavirus lockdowns in American states and cities, a journalism school professor warned that “media coverage of epidemics often stokes fear and panic.”

Writing for the nonprofit news network The Conversation, Cardiff University’s Karin Wahl-Jorgensen said the “prominence of fear” in reporting “suggests that much of the coverage of the outbreak is more a reflection of public fear than informative of what is actually happening in terms of the spread of the virus.”

Four months later, with plummeting hospitalizations and much younger infected patients as American reopenings mature, the media are still pushing fear over informative reports on the danger of COVID-19.

The chair of emergency medicine at the University of Pittsburgh School of Medicine and senior medical director at its hospital is sick of it, and wants to set the record straight.

Donald Yealy told a press conference Wednesday that hospitalizations at UPMC have plummeted and those getting sick have mild infections, “even in the midst of Pennsylvania’s reopening and the ongoing social justice protests,” PennLive reports.

The heavy focus on case count is misleading the public, he said:

We need to change our mindset and focus not exclusively on the number of cases, but on the severity of illness. We shouldn’t just be counting those who have a diagnosed infection. For the vast majority of people testing positive, their illness is mild, or they don’t even know they have any symptoms of COVID-19 infection.

Yealy called for economic reopening in the university’s region – as UPMC was doing for non-COVID patients – nearly two months ago now, saying the fatality rate was far lower than wildly panicked estimates and the infection rate much higher but far milder in many cases.

Earlier this month he said the viral load in the average infected patient was much lower, with fewer than 4 percent testing positive from 30,000 tests at UPMC and “a fraction of a percent” from 8,000 people screened when they resumed “scheduled care.”

A release from UPMC said the hospital has its lowest number of COVID-19 patients in nearly three months, with only 14 on ventilators, “a nearly four-fold decrease since the peak in mid-April.” Chief Quality Officer Tami Minnier said the hospital isn’t worried about a COVID resurgence in the fall; instead, it’s stockpiling personal protective equipment for cold and flu season.

The coronavirus positive test rate at UPMC for 15,000 other patients is just 0.25 percent, a rate that has “held steady for weeks,” according to PennLive. Yealy said the findings mean “fewer people are being admitted, and when they are, they tend to be much less sick than at the beginning or at the peak phases of the pandemic.”

Echoing critics of mainstream media coverage of the weakening outbreak, Yealy credited better protection of elderly people and other high-risk groups, and the increasing portion of young people with mild infections, with the gains.

Also questioning the conventional wisdom in the first couple months of the American coronavirus response, the doctor said the mass adoption of ventilators did not work well at UPMC. Patients hooked up to them had trouble “successfully” getting off, “and their outcomes simply aren’t as good.”