Other bias reports include bus driver using the word “Oriental,” students giving each other controversial nicknames

In September 2019, officers from the Springfield Police Department were called to the Wells House residence hall on the campus of Missouri State University.

According to a report filed by Campus Safety Officer John Matthews, police, campus officials and resident assistants met in the lobby before they were escorted to the fourth floor crime scene.

When officers reached the hallway, they saw the offense: Someone had drawn a picture of male genitalia on a dry erase board attached to a student’s dorm door along with the words “You’re a dick” next to the drawing.

According to the report, SPD “took no further action.”

The College Fix obtained copies of the reports through an open records law request. Many of the students’ names have been redacted to protect their identities.

According to the school’s bias response website, actions may be taken against those who demonstrate bias against persons or groups “because of ability, race, color, gender identity, ethnicity, religion, faith, national origin, political orientation, or sexual orientation,” but whose actions fall short of the more formal Title IX harassment process.

“An example of bias might be graffiti appearing on the wall of a commonly used space on campus,” reads the website.

According to the website, a campus community member accused of bias may be subject to a number of “voluntary interventions” that may include “a variety of activities including discussion, mediation, training, counseling and consensus building.”

A university spokesperson told The Fix the BRT was created in 2016 and has no operating budget.

In one February 2019 incident, a university employee riding the Bear Line bus shuttle overheard a driver on the bus radio report that “A little oriental girl is waiting at the stop to go to bear park north.”

The employee noted the comment didn’t come from the driver of the bus she was riding, but that it sounded like an “older male” radioing in from another bus.

“His tone wasn’t mean spirited and I don’t think he meant anything negative by it,” reported the employee, “but training on current, respectful vs. outdated, inappropriate language seems needed.”

“Even though BearLine drivers aren’t MSU employees, they represent the university and interact with students, staff, and community members on a daily basis,” the faculty member wrote.

“Overwhelmingly, I have had positive experiences with friendly BearLine drivers,” she said, adding, “But this experience concerns me that there is a gap in knowledge of what language is appropriate to refer to students or just people in general.”

“I think this is an opportunity for diversity and inclusion training to continue to facilitate an inclusive and welcoming campus,” she wrote.

In September, University Safety was called when a whiteboard in Wells House was found that read “Hi! Shabbat Shalom! Allahu Akbar.”

The area safety coordinator knocked on the door several times, but did not detect any movement inside the room. At the same time, the resident assistants debated whether the police should be called. The residents then called a central staff member, who then called campus safety, who recommended against calling the police.

The residents then received clearance to erase the white board.

-A resident assistant in Wells found two female students writing “Hi my name is Slim Shady! or Nazi Baby” on the white board outside another female student’s door. When asked to explain themselves, the students said “Nazi Baby” was an affectionate nickname they had given the other student in reference to her blonde hair and blue eyes.

Nevertheless, the police were called at 11:22 PM and arrived a half hour later to survey the white board message. After reviewing the white board, the officer “stated that no report would be written due to there not being any malicious intent perceived in the comment.”

-A dorm door decoration by a student named Hanna was defaced by turning her first name into:

An Area Coverage officer was then called, who then notified campus safety and reported the vandalism as a bias incident.

-Police officers were called when a swastika was found carved into the wood in a residence hall elevator (pictured.) One of the students living in the dorm had accused a resident assistant of negligence for failing to notice the swastika earlier, accusing them of “allowing it to happen in the community.” 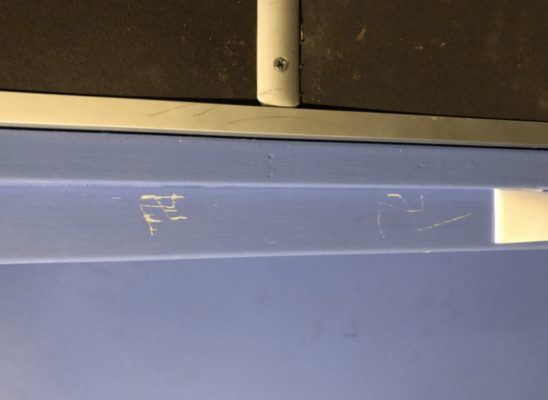 -Two resident assistants in Freudenberger Hall were doing their rounds when they saw a bulletin board display that invited students to write what identities they were thankful for. On one of the leaves, a student had written they were thankful “for bein’ a dyke.”

The university safety office was then called.

-A student called a campus administrative office with a question about graduation. But when the administrator asked her for her contact information so she could get back to her with an answer, the student yelled “Are you speaking English at all!!!” and hung up.

The student then called back, but realizing she had gotten the same administrator, she hung up once again.

The administrator then reported the student to both her supervisor and the bias response team.

“It’s hard to believe that someone about to graduate from Missouri State would make such a statement,” the administrator wrote in the complaint.