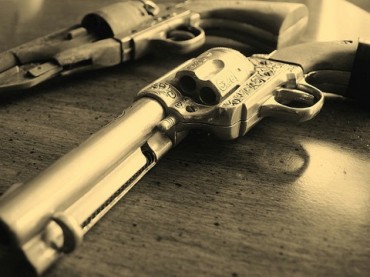 Tom H. Hastings teaches in the Conflict Resolution program at Portland State University. He also is the director of PeaceVoice, the website of which is probably what you’d expect: a massive conglomeration of race/class/gender articles.

Mr. Hastings has had it with gun violence, and, as such, wants the United States to ditch the Second Amendment.

This morning of Dec. 25, 2014, of the nine top stories from US Reuters, six were about shootings — four new ones and two about the national movement against shootings of citizens by police. This pandemic of sick violence, punctuated by mass killings of children, has gone on far, far too long. It is long past time to repeal the stupid Second Amendment.

The fate of the Second Amendment should have been sealed when the U.S. Supreme Court ruled in 2008 that past rulings by their predecessors were wrong, that in fact the amendment that provided for a “well regulated militia” really guaranteed every individual the right to own a gun. Wow. That is an interesting reading of the English language. What the Supremes have done is to not only warp the meaning and make it into twisted law, but to further prohibit states and local governments from declaring their places free of legal guns. The conservative court once again rules against the power of states, a principle that used to be associated with darn liberals who wanted to make sure everyone had the right to vote, for example, even though they weren’t properly white enough. Now when a city or state wants to outlaw firearms, too bad. The conservatives took away their powers and rights in favor of Big Brother.

To say that Hastings’ knowledge of history (United States and legal) is wanting would be an understatement. For instance, the “principle” which imposes the Bill of Rights on the states, the Fourteenth Amendment — which Hastings lauds — is the very basis by which the Supreme Court held that an individual is constitutionally permitted to own a gun.

Not to mention, Hastings got wrong the year of that landmark decision: The case was decided in 2010, not 2008. In 2008, the Supreme Court decided District of Columbia v. Heller which pertained only to an individual’s gun ownership in federal enclaves — like the District of Columbia. It did not apply to the individual states.

2010’s McDonald v. Chicago is the case which applied the Second Amendment to the fifty states.

It’s certainly bad enough that a “progressive” like Hastings would like to pick and choose which constitutional rights states and localities should be able to deny their citizens; equally bad is his lack of contemporary cultural insight.

For, while Hastings is correct that the “only logical path … is to repeal” the Second Amendment, currently that task is so daunting as to be virtually impossible. Merely take a glimpse at the American public’s view on guns and gun rights over the years.

Note the historical trend: The last four years have seen record high percentages of people saying “no” to banning the possession of handguns.

The one trend among the public that seems to benefit Hastings’ view is the desire for stricter gun laws — forty-seven percent currently favor such. However, while a mere fourteen percent want less strict laws, thirty-eight percent think current laws are sufficient. Combined, that still puts gun control advocates in the minority.