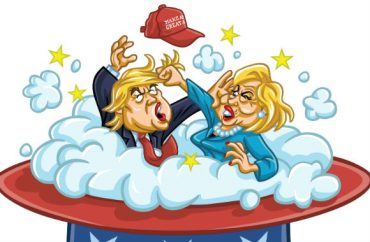 Like a handful of College Republicans chapters across the country, the WUSTL chapter has refused to endorse the Republican nominee.

But it’s not staying silent, displaying a sign reading “Trump scares us too!” outside the debate auditorium.

.@Reince, you should take note of this poster #WashUdebate2016 pic.twitter.com/GtySyIcXEK

Ruben Schuckit, president of the WUSTL chapter, told MSNBC on Sunday before the debate that the club’s decision not to endorse was “fairly gradual.”

During the Republican primary “very few individuals gravitated” toward Trump in the club, Schuckit said: “Many of us didn’t even take his candidacy that seriously.”

The WUSTL CRs are focusing on down-ballot candidates in the election, he said. Asked if Trump was hurting the party among young people, Schuckit said “Absolutely.”

Local CRs were also interviewed by Steve Doocy for Fox and Friends on Sunday morning. One student called for Trump to “drop out right now and yield his place to [vice presidential nominee] Mike Pence,” calling him a “disgrace to the Republican Party.”

The defections from Trump by chapters at Cornell, Harvard and the University of Connecticut appeared to be isolated incidents before a recording of 11-year-old lewd comments by Trump was made public Friday.

Those remarks led Alex Smith, president of the College Republicans National Committee, to declare Saturday there was no place for Trump in the Republican Party.

The Party of Lincoln is not a locker room, and there is no place for people who think it is. Definitely not with her, but not with him.

On the same day, the New Mexico Federation of College Republicans formally announced their support for Libertarian nominee Gary Johnson, the two-term former Republican governor of their state. Johnson has been a frequent beneficiary of distaste for Trump among CRs.

Jacob Davis, president of the University of Central Missouri College Republicans, told The College Fix that Smith’s tweet against Trump “shows the beginning of party realignment. It’s just such a shame it’s too late and will most likely cost us the election.”

Davis voted for Johnson, the Libertarian, and his decision has been controversial among former donors and the state board of his organization.

“If the party wants us to stand in solidarity behind a candidate, then they need to deliver a candidate worth standing behind,” said Davis. He believes that Republicans should “find an alternative conservative candidate who represents their values this election.”

Trump supporters on campus ‘are really sort of shy’

Like their favored candidate, Trump-supporting students are denouncing the non-endorsers.

Clubs and individuals that decline to endorse the Republican nominee should be removed from the party, Sean Rock, former Missouri deputy director of Students for Trump, told The Fix.

“Any ‘Republican’ disavowing Trump or voting for Clinton or Johnson is a disgrace. They are ignoring the will of the People,” Rock said in a Facebook message.

He believes that Friday’s video of Trump’s lewd remarks from 2005 was a planned event to draw attention away from nominee Clinton’s persistent scandals.

“While what Trump said may not be kosher, it is nothing compared to what Hillary has said and done,” Rock continued, referencing her husband Bill Clinton’s alleged victims of sexual misconduct.

Without the CRs’ help, pro-Trump students ended up holding their own “Deplorables for Trump” rally for the debate, according to the St. Louis Post-Dispatch. The title refers to Hillary Clinton’s comment about Trump supporters being in a “basket of deplorables” – a slur they have embraced.

Missouri Youth for Trump co-founder Thomas Hildebrand, a student at WUSTL, told the Post-Dispatch he organized the rally because “a lot of Trump supporters [on campus] are really sort of shy about who they support.” Student Paul Felder said he didn’t talk about his Trump support in class “because it’s really not seen as an acceptable viewpoint.”

Publicly supporting Trump on campus has proven perilous for many students, including the University of California-Berkeley CRs, the DePaul University CRs, a student at Gustavus Adolphus College and many more.

Jeremy Wiggins, a national delegate for Trump, told The Fix that he considered the WUSTL rally to be a success.

WUSTL CRs President Schuckit told the Post-Dispatch that the “Trump scares us too” sign was made long before the debate, when the chapter was trying to “make a statement to potential members and incoming freshmen.”

EDITOR’S NOTE: The author is the former treasurer of the University of Missouri College Republicans.

About the Author
John Lund Molfese