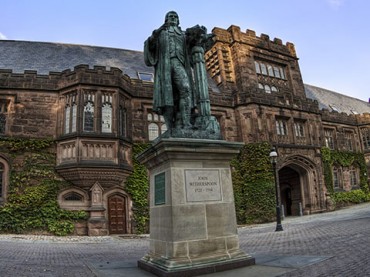 By month’s end, Princeton University could lower the evidence standard it uses for judging guilt in sexual-assault cases under direct orders from the government, among other changes intended to comply with current interpretations of Title IX.

The Faculty Advisory Committee on Policy “developed the recommendations in response to July conversations between administrators and the Department of Education’s Office for Civil Rights,” The Daily Princetonian reported.

The school said in a press release last week that faculty will vote on the recommendations at their September 15 meeting, and if approved, those recommendations will be considered by the Council of the Princeton University Community, composed of students, faculty, staff and alumni, at its September 29 meeting.

Both sides would be allowed to have advisers present from outside the Princeton community, including attorneys who could advise students but not speak for them, and both would have the right to appeal rulings. Currently, parties are only allowed to use university advisers and only accused students can appeal.

Accused students would take the biggest hit under a proposal to lower the burden of proof from “clear and persuasive” – about a 75 percent threshold for guilt, The Daily said – to “preponderance of evidence,” known casually as “more likely than not.”

Additionally, the people tasked with carrying out the new policies as well as developing future policies do not appear to have relevant backgrounds – and one has been criticized by The Daily’s editorial board for her chairmanship of a student disciplinary committee.

Rebuked By the Office for Civil Rights in July

Michele Minter, Title IX coordinator and vice provost for institutional equity and diversity, told The Daily the Office for Civil Rights forced the school to lower the evidence standard.

In a “Dear Colleague” letter to universities in 2011, the office laid out the requirements for schools dealing with sexual assault, saying they must “use a preponderance of the evidence standard” in order to be Title IX-compliant during “grievance procedures.” Minter told The Daily that administrators thought the higher evidence standard “was compliant in the context of student disciplinary hearings” until the office rebuked them in July.

Other changes include establishing a team of “three trained investigators to conduct investigations and make findings of fact and responsibility in all cases involving allegations of student sexual misconduct,” according to the press release.

Kathleen Deignan, dean of undergraduate students, and Cole Crittenden, the graduate school’s associate dean for academic affairs, will determine the penalties, as they have previously done through the Faculty-Student Committee on Discipline, The Daily said.

Though the press release said the fact-finders would get “appropriate professional training,” and Minter told The Daily “at least one person” would have “significant legal training,” the university declined to explain what that would entail.

Though Deignan and Crittenden would not evaluate sexual misconduct complaints under the changes, neither appears to have relevant legal background for judging penalties, and the university declined to say what their qualifications were.

Crittenden has a B.A. in English language and literature and a Ph.D. in Slavic languages and literatures, according to his LinkedIn page.

Deignan came under fire from The Daily editorial board in March for the procedures of the discipline committee that she chairs. The board faulted “the Committee’s lack of transparency, the conduct of its hearings and the severity of its disciplinary measures” and recommended that the university review the committee’s policies and their implementation.

In a letter to the editor, Deignan responded that the editorial and previous Daily coverage of the committee used “incomplete information from biased sources.” She said the hearings were conducted fairly and that “no student is found responsible for violating a University policy without clear and persuasive evidence.”

Separate from the faculty recommendations, the university is creating a faculty-student Committee on Sexual Misconduct, which will further study and make recommendations on Title IX and sexual misconduct procedures, the press release said.

The leaders of that committee also appear to have backgrounds unrelated to their work.

Deborah Nord, an English professor, is also the director of the Program in the Study of Women and Gender. Her Princeton biography notes that she is interested in “Victorian literature and culture;  gender studies;  women’s writing;  ethnicity and race in 19th century writing,” among other interests.

Minter, the Title IX coordinator, previously led fundraising efforts for Princeton and the College Board, and got her MFA from Brooklyn College, according to Princeton’s press release when it hired her for her current role in 2011.

Minter deferred questions to a university spokesperson who shared the university’s public materials.