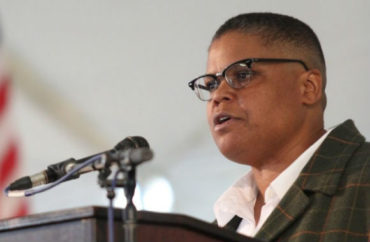 ‘I am not a newsworthy person,’ so you can’t cover my words spoken in public

The Massachusetts private school, which lowered its flag to half-staff to mourn Donald Trump’s election victory and protect free speech, published the 19-minute address on its YouTube channel.

It also published an extended text excerpt from the speech by Taylor, who helped organize this year’s International Women’s Strike and authored the best-selling book From #BlackLivesMatter to Black Liberation. Taylor starts like this:

Today is recognition of the sacrifices that you and your family have made to finish college, but you are graduating into a world of uncertainty and one that is increasingly dangerous.

These dangers manifest themselves in a variety of ways. Perhaps the most extreme illustration now resides in the White House. The president of the United States, the most powerful politician in the world, is a racist sexist megalomaniac. It is not a benign observation but has meant tragic consequences for many people in our country.

From the terror-inducing raids in the communities of undocumented immigrants; to his disparaging of refugees in search of freedom and respite; he has empowered an attorney general who embraces and promulgates policies that have already been proven to have had a devastating impact on Black families and communities; he thinks that climate science is “fake” and his eagerness to take the country into war can only be interpreted as a callous disregard for its steep price in both money and human life. This list could continue but suffice to say that Donald Trump has fulfilled the promises of a campaign organized and built upon racism, corporatism, and militarism.

Fox News noticed, and aired a short excerpt that includes Taylor’s denunciations of the president.

Guess who Taylor is blaming for criticism of her commencement address.

Taylor wrote a private Facebook post that was copied and tweeted by Drexel University Prof. George Ciccariello, best known for tweeting that a school police officer should be shot like the fictional dog Old Yeller and that “All I Want for Christmas is White Genocide.”

Here's what Keeanga-Yamahtta Taylor said that triggered @FoxNews: “The president of the United States…is a racist, sexist, megalomaniac.” pic.twitter.com/c8alRWnBmW

The Princeton professor said she was canceling public lectures in Seattle and the University of California-San Diego “for fear of my safety and my family’s safety,” having received “more than fifty hate-filled and threatening emails,” including a murder threat, since the Fox News segment:

I have been threatened with lynching and having the bullet from a .44 Magnum put in my head. I am not a newsworthy person. Fox did not run this story because it was “news,” but to incite and unleash the mob-like mentality of its fringe audience, anticipating that they would respond with a deluge of hate-filled emails – or worse.

Taylor goes on to blame Fox News for the recent murder of Richard Collins III, a black student at Bowie State, by a white University of Maryland student, and the murder of two men who tried to defend girls on a Portland light-rail train from a white supremacist:

The cancellation of my speaking events is a concession to the violent intimidation that was, in my opinion, provoked by Fox News. But I am releasing this statement [to her Facebook friends] to say that I will not be silent. Their side uses the threat of violence and intimidation because they cannot compete in the field of politics, ideas, and organizing. The true strength of our side has not yet been expressed in its size and breadth, and so they believe they are winning.

She called on her readers to join her to “build a massive movement against racism, sexism, and bigotry in this country.”

.@KeeangaYamahtta Taylor has become the latest target of mob action whipped up by Fox News, & has canceled speeches due to violent threats. pic.twitter.com/xdWdf22l0B

Her publisher appears to have printed the same statement.

Taylor’s Princeton colleagues in African American studies, as well as others at the university and from other schools, have released a statement “in solidarity” with Taylor. It also blames Fox News for reporting on a public address:

Fox News subsequently targeted Professor Taylor in print and on television on May 28, focusing on an opening remark of hers that President Trump, “a racist and sexist megalomaniac,” was the biggest threat to the students’ futures. Fox succeeded in inciting Trump followers, who have attacked her with racist, sexist, and homophobic speech and vicious death threats. Those targeting Professor Taylor have called for Princeton to fire her.

We denounce these acts of racial, gender, and sexual violence and the efforts to intimidate and harass Professor Taylor. Her ideas deserve the widest possible audience, free from threat or intimidation.

The statement does not reconcile its denouncement of Fox News with its statement that Taylor’s ideas “deserve the widest possible audience,” or contemplate that she may have drawn the same criticism if another network, such as MSNBC, chose to highlight them.

As of Friday afternoon it includes about 1,500 self-identified faculty at any school, a few dozen of which are Princeton, and more than 4,000 signatures total.

One liberal pundit is contrasting the reaction to the anonymous email threats toward Taylor with the reaction to physical threats against libertarian social scientist Charles Murray at Middlebury College, where the liberal professor who interviewed Murray was physically attacked and put in a neck brace.

has there been a single column about Keeanga Yamahtta-Taylor from the crowd who wrung their hands over protests of Charles Murray?

There is no known evidence that Taylor has been confronted in person by any critic of her public address, much less that students asked her to leave campus because of her race, as happened to Evergreen State College’s Bret Weinstein.

The white biology professor left campus after school police told him this week they had received an order from President George Bridges to “stand down,” meaning they couldn’t protect him from physical threats on campus.

Hampshire College itself released a statement “in support” of Taylor, the onetime Hampshire applicant it rejected, as Taylor herself acknowledged in the address.

President Jonathan Lash and Board Chair Gaye Hill said Taylor was the victim of “vicious and explicitly racist, misogynistic, and homophobic threats”:

And we condemn the actions of those who are inciting violence by willfully taking information out of context and fanning the flames of prejudice and hate. …

We are dismayed that Professor Taylor is being attacked and threatened as a result of her speech at Hampshire. The assault to which she is now being subjected only serves to reinforce how very important her message is, especially in these times.

The College Fix has asked Hampshire to clarify who is “inciting violence” and what information is being taken out of context.

UPDATE: Hampshire College’s statement in support of Taylor and denouncing “those who are inciting violence” against her has been added.