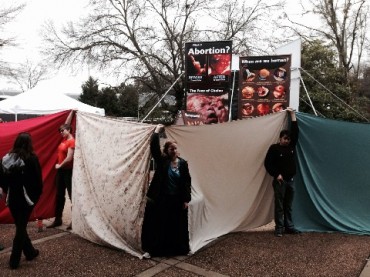 ATHENS – Pro-life and pro-abortion groups faced off at the University of Georgia on Monday and today. While pro-life students showed their peers the reality of abortion with graphic images, pro-choice students built a makeshift wall to block the images from view and held signs with statements like “Pussy Power” and “My Body, My Choice.”

In interviews with The College Fix, pro-abortion students called the graphic images – which showed bloody fetuses after late-term abortions – “hateful speech.” They said students shouldn’t be forced to look at them, and that most of the pictures showed “stillborns” and not abortions. Pro-life students countered that stark photos are needed to impact people on the realities of abortion, and that their photos have been authenticated and vetted.

The dueling protests come on the heels of another abortion-related controversy at the public university in which students’ prolife posters were trashed and vandalized.

The pro-life display was hosted by Justice for All, a Kansas-based group that trains students and brings literature and graphic image displays to college campuses. The goal, Justice for All logistics coordinator Rebecca Haschke told The College Fix, is to engage students in dialogue about when life begins.

“If we just brought out a table and pamphlets, we would maybe get ten people to talk with us,” Haschke said. “With the display, we will talk to one or two hundred students.”

Haschke said it is necessary for students to see the graphic results of abortion. She compared the experience to the famous open casket picture of Emmett Till, a 14-year-old black boy whose brutal killing at the hands of white Mississippians galvanized the Civil Rights movement.

Not everyone agrees with JFL’s approach.

Women’s Studies Student Organization members stood by with picket signs. Many of the signs’ messages were common pro-choice slogans like “My body, my choice” and “How can you trust me with a child, but not with a choice?” Others were more creative: “Put your politics where your pussy is! (If you don’t have one, shut up).” One male student, dressed in a suit jacket and boxer briefs held a sign reading, simply, “Pussy power.”

The Women’s Studies Student Organization also distributed condoms and sexual health literature from a table nearby.

Members of the Sexual Health Advocacy Group, for their part, held up bed sheets around the display to create what they called a “corridor.”

SHAG president Danielle Duncan told The College Fix that the intent was not to suppress JFL’s speech, but to give students a choice about whether to view the prominent display or not. “This shows a persistent pattern of pro-life censorship on campus,” Stapleford said, referring to when her pro-life posters were repeatedly vandalized.

“The majority of all the late-term abortion pictures that you’re seeing are actually stillbirths — women who wanted to have a baby and their baby died, and they had to get the baby taken out, which is a pretty common medical procedure,” Duncan said. “So it is pretty much a lie, to present pictures that aren’t true.”

When asked by The College Fix, JFL’s Haschke disputed the claim, saying: “I don’t know what sources they’re using, but I haven’t seen them.”

She provided a flier stating the images are owned by the Center for Bio-Ethical Reform, a pro-life group that “…possesses signed affidavits from a former abortion provider and from the photographer who took the pictures, attesting to the authenticity of the abortion photos.”

While the pro-life and pro-choice demonstrations were packed closely together in Tate Plaza, the director of the Tate Student Center, Dr. Jan Barham, told The College Fix in an email that there had been no trouble.

“I have engaged various leaders in a dialogue around freedom of expression and the importance of having an environment in which we can engage in civil discourse,” Barham said. “The leaders of [all] organizations have been cooperative and accommodating to each other and have worked to ensure the various perspectives are respected and free of censorship.”

There were even a few instances of interaction. At least one pro-choice student, still carrying her sign, began a cordial discussion with a representative of Justice for All. While it did not appear either individual convinced the other, the interaction represented a small example of dialogue in a debate fraught with emotion.

College Fix contributor Blake Seitz is a student at the University of Georgia.