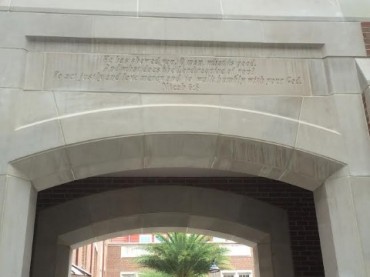 The University of Florida has been hit with a cease and desist letter from the pro-atheism Freedom From Religion Foundation legal activist organization, which is demanding that a Bible verse etched in its new Heavener Hall be removed.

The complaint letter, addressed to President Dr. Kent Fuchs, protests a short verse inscribed along an arch in the 1-year-old “Collegiate Gothic”-style business school at the Gainesville-based public university.

The verse is Micah 6:8 – “He has shown you, O man, what is good. And what does the Lord require of you? To act justly and to love mercy and to walk humbly with your God.”

“This inscription violates the Establishment Clause of the First Amendment and cannot remain on university property…public schools, as a part of the government, may not promote, endorse, or advance any religion,” states the April 13 letter by Andrew Seidel, an attorney with the foundation.

Adds Seidel: “This inscription demonstrates a school preference for religion over non-religion and for Christianity over all faiths. When a school chooses to display an excerpt from a religious text, it signals to students who hold differing beliefs that they are outsiders, that they are excluded from the campus community.”

Heavener Hall, named for local business leader Bill Heavener, houses the university’s undergraduate business programs in a state-of-the-art learning center that includes nine classrooms, 16 study rooms, 29 advising offices, and a professional development center. Heavener is CEO of The Heavener Company, and serves on the boards of directors of multiple institutions of higher education.

The Freedom From Religion Foundation is the nation’s largest association of nonbelievers, with more than 22,000 members nationwide. Since the University of Florida is a public institution, the foundation interprets the school’s inclusion of a Biblical text as state speech.

However, the Supreme Court has not interpreted the Establishment Clause consistently; debate still ensues over whether or not it forbids all government entanglement with religion, or merely prevents against the establishment of a national religion.

The clause itself reads: “Congress shall make no law respecting an establishment of religion, or prohibiting the free exercise thereof…”

The Freedom From Religion Foundation’s consideration of the Establishment Clause accords with court decisions such as Everson v. Board of Education and Wallace v. Jaffree, which have upheld the “wall of separation between church and state” interpretation rather than the more simple one of forestalling the establishment of a national religion.

Acknowledging that the verse’s inclusion might have been a preference of the donor, the foundation nevertheless states that this does not excuse the constitutional violation.

But Jarvis Henderson, a campus minister at Campus Alive, told the school’s newspaper the Alligator that the verse is “something that’s motivational, inspirational, and it’s probably something that we hear every day and don’t realize it comes from the Bible”

The foundation has been active in Florida this year. It also challenged the city of Ocala last September over its motto: “God be with Us.” These words appear on the city’s seal and is worn by certain officials, such as police officers, on patches. Mayor Kent Guinn kept their city seal and did not give in to the group’s demands.