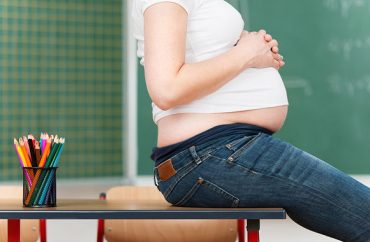 Claflin University, a small historically black institution in South Carolina, kicked a student out of her dorm last year after it found out she was pregnant.

It didn’t refund her the dorm payment, and Kamaria Downs had to move in with a professor.

After she graduated, Downs threatened to sue the school for violating Title IX – leading Claflin to revise its anti-pregnancy policy.

NBC News reports that Downs and the school reached a confidential settlement last month, under which Claflin will provide “reasonable accommodations to pregnant students in the same way it does for students with disabilities or temporary medical conditions”:

The university found out about Downs’ pregnancy through medical records she filled out for her spring student teaching assignment.

Kamaria Downs was a senior honors student at Claflin University when she found out she was pregnant.https://t.co/qDLujYK5Ij

Downs’ lawyer spins the school’s treatment of Downs as a religious-liberty fig leaf, and NBC News puts it in the same category as conservative Christian colleges seeking Title IX exemptions in response to the federal government’s novel interpretation of a law prohibiting “sex discrimination” as covering “gender identity.”

MORE: No documented discrimination at most ‘shame list’ colleges