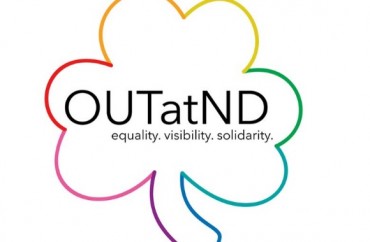 Efforts to support and defend the lesbian, gay, bisexual, transgender and queer community at the University of Notre Dame continue to grow.

A new group, OUTatND, emerged at the private, Catholic university in the spring to ramp up support for same-sex marriage and the gay lifestyle.

“We also desire to promote local and national events that raise social and cultural awareness of LGBTQ issues and concerns, including but not limited to the National Day of Silence, National Coming Out Day, World AIDS Day, queer film festivals, and participation in pride parades,” the group’s website states.

The creation of OUTatND is just the latest in a string of developments at the Catholic university to support and defend homosexuality.

During this 2013-14 school year at Notre Dame, PrismND, a GLBTQ student group, was also established on campus, hosting “National Coming Out Day” observances and lectures. The university also established a pastoral plan called “Beloved Friends and Allies: A Pastoral Plan for the Support and Holistic Development of GLBTQ and Heterosexual Students at the University of Notre Dame.” Campus officials also put out a video touting its LGBTQ athletes.

PrismND complies with the pastoral plan for the support and holistic development of GLBTQ students in that it aligns with the Catholic view of traditional, heterosexual marriage.

OUTatND launched its campaign with a video entitled “Out and Proud” on Tuesday, April 28 – the same day that the U.S. Supreme Court heard oral arguments on the same-sex marriage case Obergefell v. Hodges.

According to its website, members of OUTatND encourages its members to “engage in activist practices that celebrate the embodiment of non-normative sexual and gender identities.”

OUTatND began after student recognition of “the limitations of PrismND because of LGBTQ rights that remain unrecognized and needs that remain unmet, such as the support of gay relationships,” its website states.

The website notes that Notre Dame continually ranks in the top ten “most LGBT-unfriendly universities. In a 2012 Princeton Review Survey, Notre Dame held the number six spot, and has since moved to number nine in 2014.”

Despite lacking official recognition, OUTatND has already had an extremely vocal presence on campus. Initiating a “white board campaign” this past spring, the group held public photo shoots on campus for LGBTQ students and their allies who wished to pledge their support. Students held whites boards with the message: “I’m gay and I’m proud to be OUTatND.”

The group also conducted a sidewalk chalk campaign across campus promoting their organization and its vision.

Bill Dempsey, chairman of Sycamore Trust, an alumni group dedicated to the preservation of Notre Dame’s Catholic character, penned a letter to the university in response to the chalk campaign.

“Will the university respond at all to a student organization overtly hostile to fundamental Church teachings, and if so whether it will be with the clarity and firmness it would doubtless show toward a student organization seeking to enlist students in, say, discrimination against homosexuals and lesbians or black or illegal immigrants or in cheating or abortions?” his letter stated.

Notre Dame did not respond to Dempsey’s inquiries, he told The College Fix.

Notre Dame student Tim Bradley, president of Students for Child-Oriented Policy, a group dedicated to promoting Church teachings of traditional marriage, questions what the existence of OUTatND means for PrismND.

“The existence of OUTatND reveals that at least a subsection of the LGBTQ community on campus has had enough of PrismND due to Prism’s limitations with respect to advocating for things such as same-sex marriage…I would not be surprised to see PrismND move slowly away from any deep rootedness in the Church as its constituents become less and less interested in what the Church has to say, given the new cultural and legal landscape,” Bradley said in an email to The College Fix.

OUTatND’s directors did not respond to emails seeking comment.