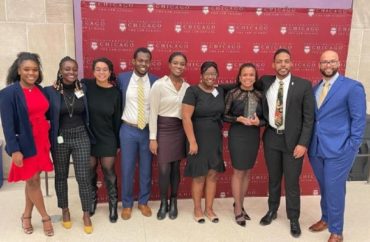 Black law students at the University of Chicago took issue with their pro-life classmates writing messages about abortion around campus earlier this week.

The Law Students for Life group wrote messages like “Human rights begin in the womb” and “Women deserve better” on campus. But the group also chalked a message that pointed out that more black babies are aborted in New York City than are born every year.

I’m so proud of the Law Students for Life at UChicago.
Well done.

The chalking “defacement,” according to the Black Law Students Association “isolates, victimizes, and agitates Black students at the University of Chicago and beyond,” the group wrote in a letter posted to its Instagram page.

The pro-life activists’ “ideology” is not just “intolerant and sexist” but “rooted in racism and white supremacy.”

“Such bigotry undermines the importance of Black people’s agency in our own decision-making and autonomy,” the letter stated.

At my university’s law school, @UChicagoLaw, a pro-life group wrote on a sidewalk: “More black babies are aborted than are born in New York City.”

The letter then went on to challenge the pro-life group to say what it had done to address police killings, maternal mortality and the death penalty, and particularly their affects on black individuals.

“The lesson? White people are ALWAYS to blame. Any blame placed on black people, no matter how deserved, is racist and inexcusable,” he tweeted. “These are future lawyers.”

The black student group has previously spoken out in favor of abortion.

It urged donations to pro-abortion groups to help women abort their babies.