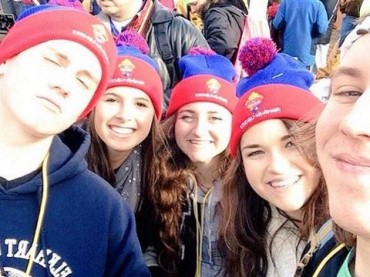 WASHINGTON, D.C. – Hundreds of thousands of people converged Thursday in the nation’s capital for the 42nd annual March for Life – and nearly two-thirds of them appeared to be under the age of 30.

Young people took part in the world’s largest civil protest against abortion in droves, showing that millennials stand strong against the 1974 U.S. Supreme Court decision that has led to more than 55 million abortions.

One of the largest swaths of demonstrators were high school students who had been bussed in. College students and families were a close second. Moms pushed strollers. Teens held signs. Chants about the sanctity of life rang out over the mall. The metro was clogged with young faces wearing March for Life shirts. Young people excitedly cheered as they held large banners declaring their support of life.

During an intense moment of the rally, a group of pro-choice women who crashed the event chanted out “you are the brainwashed generation” as the marchers chanted back “we are the pro-life generation.”

Another popular chant among the youth in the crowd was: “Hey obama, thank yo mamma, she chose life.”

Some of the pro-abortion women who attempted to disrupt the march wore white pants with pink and red stains that covered their crotch areas and traveled down their legs. One pro-life teenage girl yelled at them incredulously: “You’re sick.”

Pro-choice protesters also attempted to block the road and halt the march. However, the incident seemed to only motivate the pro-lifers, who continued marching and chanting toward the steps of the Supreme Court.

“The young people showed that they were peaceful and stood strong in the face of adversity,” said Lauren Castillo, Rocky Mountain Regional Coordinator for Students for Life of America.

Showing their dedication to the cause, some students drove through the night to attend the rally.

Sara Silander, a 21-year-old senior from Jacksonville, Florida, who is president of Georgia Tech Students for Life, told The Washington Times that “I have always been taught that we should respect the dignity of everyone, including the unborn. We’ve always been told to protect the minorities, the impoverished and everyone, and that is so important, but we have also include the unborn.”

Young people took to Twitter in droves to express their excitement of being part of the rally in a “pro-life tweetfest.” In addition to the pro-life hashtags, many also used #AllLivesMatter.

“Pro-life youth are not afraid to tell the world that abortion is wrong and will be ended, today we proved it!” Tweeted out ProLife Youth.

I’m proud to be part of the growing number of pro life millennials! #ProLifeYouth#MarchforLife2015pic.twitter.com/VIolEyzPST

College Fix contributor Sade Patterson is a student at the University of New Mexico and vice president of its Students for Life chapter.