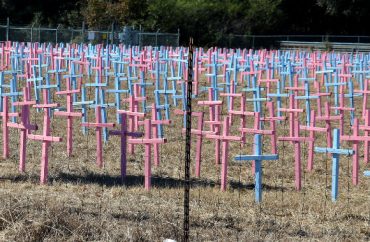 No such worry about ’emotional trauma’ for pro-choice, feminist, LGBT displays

Miami University of Ohio boasts that it’s a “public Ivy,” a marketing term coined in the 1980s to describe public colleges that offer an “Ivy League collegiate experience.”

Like private Ivy League institutions, it also censors its students to avoid offending others, but unlike its private peers, Miami’s vague and unbound policies on speech are unconstitutional.

The Alliance Defending Freedom filed suit against the taxpayer-funded university on behalf of a pro-life student group Wednesday, targeting a policy that gives administrators “unbridled discretion” to “edit” the messages of student groups and even block them entirely.

The Students for Life chapter requested permission this fall to set up a “Cemetery of the Innocents” display to “represent the lives lost to abortion,” which it claims has convinced multiple pregnant women to not have abortions since it started in 2015, according to the federal lawsuit.

The administration hasn’t taken issue with the display except for a year ago, when it made a “last-minute requirement” for the club to include a sign attributing the display to Students for Life.

Back then, administrators also allowed students in several classes to erect their own counterpoint “Reproductive Justice” display next to the pro-life students’ display – but without requiring them to get the same permits, according to the suit.

This fall, Director of Student Activities Caitlin Borges dropped the hammer: Students for Life would have to post “warning signs around campus that effectively urged people not to view it,” a demand the lawsuit characterizes as a “trigger warning.”

Though the requested warning was purely descriptive – that it identify Students for Life as hosting its “annual Cross Display” and provide contact information for the club’s president to answer “any questions” – Borges crossed a constitutional line, according to the suit:

Defendant Borges then proceeded to explain that she was imposing this additional requirement because of the reactions people might have to the Cemetery of the Innocents display, explaining she “had a number of folks reach out to me to raise their concerns about the display.” …

[S]he feared that the display might cause “emotional trauma” for those who might view it and because she wanted to help these individuals “better protect and manage their emotional reactions to the display.” [Keep in mind this is a field of white crosses, not graphic images of aborted fetuses.]

Defendant Borges closed her e-mail by stating that she would be “really happy to sit down and talk with you about ways to promote your mission in the future that may be less harmful for some of our community members.” [Again – looking at white crosses is considered “harmful.”]

Borges’ claim that the display “is quite polarizing and causes a lot of unrest on campus” is a gross exaggeration of its actual history, according to the suit: One professor directed his students to vandalize the display the first time it was erected.

Even after SFL President Ellen Whitman protested that the warning signs would dissuade the very women the club wanted to reach from passing the display, Borges told Whitman the signs were required.

Borges took a few days to answer Whitman’s request for a policy justification – the day after the display was supposed to be erected, according to the suit.

She pointed to the “Policy for Campus Displays,” which requires groups to complete an approval form but had not been consistently enforced on the annual cross display, and the second paragraph of the “Right of Expression of Students Policy,” which says Miami University has an “equal and simultaneous obligation to protect the rights and freedoms of students who do not choose to participate in a demonstration.”

Because of Borges’ unconstitutional chilling of the club’s speech, it skipped the cross display and “has not attempted to engage in any expressive activities in any open, outdoor, generally accessible areas of campus,” according to the suit.

Its members risk punishment under the student conduct code if they engage in “spontaneous” expression in response to current events, “anonymous” expression or any expression for which they have ignored orders to post trigger warnings.

The second policy cited by Borges is dangerously overbroad, the plaintiffs say: It subjects them to a “disorderly conduct” charge if their expression causes “alarm, annoyance, or nuisance” to anyone exposed to it.

By not enforcing trigger warnings on the spontaneous and unpermitted Reproductive Justice display, it’s clear that Borges and Peter Haverkos – senior assistant dean for student and academic success and fellow regulator of student speech – ignored the “emotional trauma” it could cause “parents who regret an abortions,” the suit says.

No similar trigger-warning signs were observed around a similar and potentially traumatic display, for the “Trans Day of Remembrance,” or the Clothesline Project, in which women affected by violence create and display shirts “expressing their emotions.”

This violates the pro-life students’ Fourteenth Amendment rights, because the administration treated their speech differently than others’ speech.

The plaintiffs demand “nominal and compensatory damages,” as well as attorney’s fees, for the university’s knowing and flagrant violation of their well-established constitutional rights to engage in spontaneous, anonymous and condition-free expression without getting content-based approval from administrators.

They asked the court to prohibit the defendants from enforcing the two speech codes and a declaratory judgment that the codes violate their First and Fourteenth Amendment rights, “facially and as-applied.”

In a separate statement from Students for Life of America, President Kristan Hawkins said the “unnecessary obstacles” faced by the Miami University club – which simply wanted to start a “conversation about their love and concern for preborn infants and their mothers” – weren’t unusual.

It was the second attack on the chapter’s rights this fall, according to SFLA: A vandal also destroyed its display titled “When Do Human Rights Begin?”

Read the lawsuit, alliance statement and prior vandalism against the chapter.