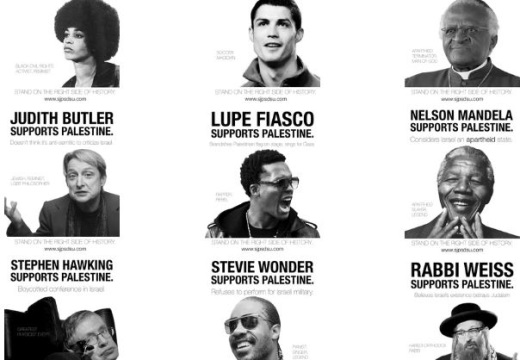 Students for Justice in Palestine, a group of faculty and students dedicated to furthering the cause of the Palestinian people, recently launched a new advocacy and membership drive campaign at San Diego State University to coincide with the start of the fall semester.

Called “The Right Side,” the campaign aims to “educate the student community about the reality of apartheid in Palestine,” SJP co-chair Nadir Bouhmouch said in an email to The College Fix.

At least one pro-Israel group on campus has expressed concern about the campaign, which includes fliers posted around campus, saying some of the claims in the campaign are not accurate and the effort overall could “divide and destroy our campus climate.”

The slideshow for the campaign, which can be seen on the SJP website, serves as an instruction manual for “standing on the right side of history” by guiding people to the There are two facets of the online presentation. The first frames the Israeli-Palestinian controversy as the big Civil Rights and humanitarian issue of our time.

“The racist grandpa is what you probably don’t want to be in 20 or 30 years, right?” it asks provocatively.

In the slideshow, SJP likens the way Palestinians are treated in Israel to South African Apartheid and Jim Crow America. This claim is backed by facts such as “Israel segregates buses, schools, roads and residential areas.”

The second part of the campaign lists prominent people who stand on the side of the Palestinians, such as Nelson Mandela and Stephen Hawking. Alongside each picture is a short blurb, such as the one accompanying Hawking’s portrait: “Boycotted conference in Israel.”

Nirit Revzin, president of Aztecs for Israel, a student group committed to promoting unity and action amongst pro-Israel students, expressed concern over the campaign.

“The Right Side Campaign has the potential to completely divide and destroy our campus climate,” Revzin said in an email to The Fix. “For a public university that seeks to embody ideals of acceptance and respect, such a campaign is intolerable and takes many steps back in terms of reaching peaceful terms between the pro-Israel and pro-Palestinian students.”

During the 2013 spring semester, Aztecs for Israel hosted Israel Peace Week, meant to educate students about the Israeli-Palestinian conflict and to serve to balance the narrative created by SJP’s Palestine Awareness Week, held in fall 2012 on campus.

Though successful, one of the setbacks was a lack of cooperation from Students for Justice in Palestine. As reported in The Daily Aztec at the time, Aztecs for Israel has repeatedly sought a dialogue with their pro-Palestinian counterparts, which they stated would be “a great first step.”

Revzin’s major concern regarding the campaign is that “the claims in the campaign are not only dishonest, but hurtful to many pro-Israel students.”

She says that “not only does Israel welcome minorities, but it celebrates minorities with equal rights and protections.” She cites as an example the Israeli doctors who have operated on Palestinian children with congenital heart problems through Save A Child’s Heart.

In response to claims that the campaign could be seen as hurtful or offensive, Bouhmouch said it’s not “designed to be offensive or hurtful in any way whatsoever.”

“We are simply calling attention to serious human rights violations faced by the Palestinian people every day,” he continued. “Questioning Israeli policies is not considered offensive in Israel, so why should it be considered offensive in the United States? Claiming to feel offended or hurt, we believe, draws on an unjust state of exceptionalism provided to the state of Israel as a result of the horrendous crimes of the Holocaust. However, the Palestinian people were not the perpetrators of what we believe is the worst crime in human history, so why should they suffer the consequences of the disgusting European tradition of anti-semitism? Claiming offense and hurt is legitimate in the face of true anti-semitism or the illogical denial of the Holocaust. But our campaign does neither of these. Hence, claiming offense and hurt becomes an abuse of the memory of the Holocaust and a form of apologism for crimes against humanity today in Palestine.”