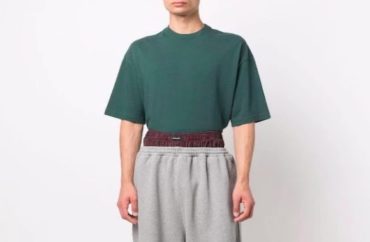 A professor at California State University, Northridge is unhappy about a noted fashion company trying to cash in on black hip hop culture.

Balenciaga’s very pricey sweatpant/boxer combo — $1,190 retail — is just that: It features what look like boxers “peeking out from the [sweats’] waistband,” according to CNN Style. It’s a popular look, particularly among young black men.

However, controversy arose after a TikTok user posted a video about the pants, saying “This feels racist […] They’ve woven the boxers inside the trouser.”

Africana Studies Professor Marquita Gammage told CNN she also was “disturbed” by the pants, claiming they represent an “exploitation of Black culture with the hopes of securing major profits.”

Black men being discriminated against and devalued for sagging pants and Balenciaga is profiting off the style. Crazy how it’s ghetto until they put a price on it pic.twitter.com/ujjFkHfYnt

While sagging pants — which often involve jeans or sweatpants lowered past the waist, with boxer underwear exposed at the top of the waistline — have been popularized in hip hop culture, the style has also “been used to criminalize Blacks, especially Black males as thugs and a threat to American society,” Gammage said.

“Balenciaga men’s Trompe-L’Oeil sweatpants in red triggers immediate concern given the grotesque similarity to the iconic African American hip hop aesthetic worn by Black Americans for decades that has resulted in the imprisonment and death of Black men,” Gammage told CNN over email. “The trousers have commercial cultural appropriation written all over them; branded with the name Balenciaga.” 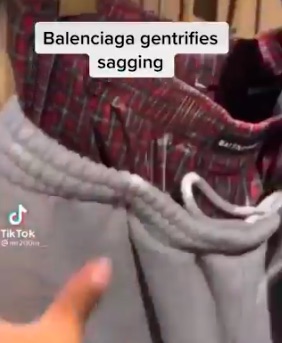 Gammage, who according to her bio focuses on “overt and covert representations of racism and sexism as it pertains to media generated images of Black womanhood,” discussed this issue more in depth in her 2018 article “Cultural Appropriation as ‘Agency Reduction.'” In the International Journal of Africana Studies piece, Gammage says actions like Balenciaga’s “undermine the ingenuity, functionality and beauty of Black cultural expressions while simultaneously delegitimizing Blacks experiences of injustices for capital gain.”

Companies like Balenciaga take advantage of styles which have been “consequential” for blacks, yet “fail to challenge systematic racism that criminalizes Blacks and Black clothing trends,” Gammage added.