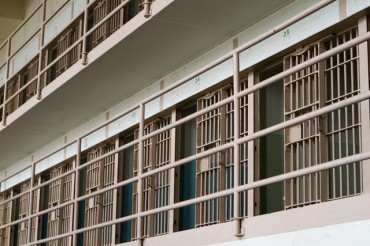 A well respected UC Santa Barbara sociology professor in a recent lecture blamed nearly everything but personal responsibility for the high crime and incarceration rates that have long plagued black and Latino communities.

“We need to take accountability for what the state and government has done,” said Dr. Victor Rios during his Feb. 21 guest address at Swarthmore College. “Officers are still beating down black and brown kids.”

And U.S. law enforcement is overtly radicalized and “hyper-masculine,” said Rios, a highly regarded sociologist among leftist academic circles. Rios, a self-described former gang member who eventually turned his life around and earned a Ph.D. from UC Berkeley, has won several awards and grants, has been featured in many news reports, and often gives motivational speeches at schools.

Rios’ address at Swathmore was given not only to college students, but visiting school children as well. He told them he finds fault not only with police, but also politicians and the public, for the high amount of black and Latino incarceration rates, saying people’s fear of “radicals like Malcolm X” is a factor. Rios added the school-to-prison pipeline can be linked to the way some Americans label young people.

“It’s not a question of whether black and Latinos are more prone to crime, but how we choose to label them,” he said. “How you label someone determines how you treat them.”

With that, the term “at risk” becomes almost a self-fulfilling prophecy for inner city youth, he said.

Rios neglected to speak on what role, if any, he believes personal choice, the drug trade, or family lifestyles in high-crime communities has played in those statistics.

And while he focused on the rising number of incarcerations since the 1960s, he did not address Bureau of Justice Statistics stats that the violent crime rate has been on a steady decline since 1973. Rios isn’t a fan of jail, anyway. He said he prefers “restorative justice.”

His 2011 book, Punished: Policing the Lives of Black and Latino Boys, “analyzes how punitive juvenile crime policies and criminalization affect the everyday lives of urban youth,” according to his website.

In his speech, Rios said he aims to couch his goals in language that most people can understand. Conservatives, he noted, are excellent at this: “They don’t say they hate black people; they say that welfare makes people lazy.”

Rios’ talked was dubbed “Consequences of Mass Incarceration of Black and Latino Boys” and sponsored by a plethora of Swarthmore groups and academic departments, including:  the Black Cultural Center, Latin American Studies, Gender and Sexuality Studies, the Dean’s Office, the Provost and President’s Offices, the Queer and Trans Conference, and the Political Science, Sociology and Anthropology, Psychology and Educational Studies departments.

Rios, a former Oakland gang member, has come full circle, he told the audience. In a 1994 PBS Frontline documentary on the high school dropout rate, Rios was personally featured as a dropout and delinquent. The documentary shows footage of him being forcibly detained by two officers in a high school hallway. Now a Ph.D. sociologist and “social justice” advocate, Rios is a dynamic speaker.

In his lecture, he went out of his way to encourage visiting Chester, Pa., school children in the audience, saying: “I look forward to you being in college someday … and maybe even being your professor.”

While Rios’ argument was offered with zeal, others scholars have poked holes in ideas behind his beliefs.

For example, Heather MacDonald, the John M. Olin fellow at the Manhattan Institute and an outspoken advocate for New York City’s so-called “stop-and-frisk” policing strategy, wrote in The Wall Street Journal in January that “the advocacy community sees only racism in the fact that the bulk of trespass and other stops happen in minority neighborhoods.”

“But that racism charge,” noted MacDonald, “ignores the statistical truth that crime, too, is disproportionately concentrated in those neighborhoods.”

Rios did not cite the demographic makeup of the neighborhoods he studies and kept his remarks mostly to abstract complaints about “The System.”

“I’m assuming most of us in here are progressive,” admitted Rios.

Clearly his peers in academia are big fans, based on the number of speeches he gives and accolades he has received.

“Professor Rios’ ambitious research on the factors that contribute to the social marginalization and hypercriminalization of Latino and black men has garnered significant national attention,” stated UCSB’s Verta Taylor, chair of sociology, in a 2012 announcement that Rios was awarded a $300,000 grant to study “how the interactions between gang-associated youth and their parents, school professionals, police, and probation officers affect their identity and criminal behavior. ”

“This new project will provide insight into the important role that parents and other authority figures play in helping young people at risk for gang involvement unshackle themselves from the criminal justice system,” she said. “Rios has a keen commitment to public sociology and is emerging as a leading expert on gang process and gang reduction.”