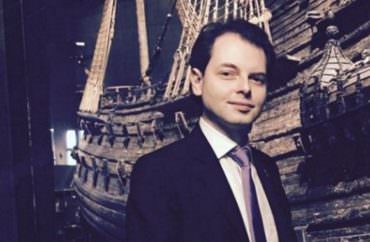 The New Jersey Institute of Technology has placed lecturer Jason Reza Jorjani on administrative leave following an article in The New York Times that reported on highly controversial statements the educator made during a conversation with an undercover documentarian.

The Sept. 19 article reports on an extensive undercover operation into the alt-right’s leadership done by a Swedish grad student, Patrik Hermansson, a member of the Hope Not Hate watchdog group. The article embeds video taken by Hermansson that shows him talking to Jorjani about the movement’s end game.

“We will have a Europe, in 2050, where the bank notes have Adolf Hitler, Napoleon Bonaparte, Alexander the Great. And Hitler will be seen like that: like Napoleon, like Alexander, not like some weird monster who is unique in his own category — no, he is just going to be seen as a great European leader,” Jorjani was recorded as saying at an Irish pub near the Empire State Building.

Jorjani did not respond to requests for comment from The College Fix, but he has written a long blog post titled “Why I Left the Alt-Right” saying the video was deceptively edited and puts that statement out of context.

Hermansson’s report dubs Jorjani the “architect of the Alt-Right Corporation,” which the New York Times article described as “an organization established to foster cooperation and coordination among alt-right groups in Europe and North America.”

Jorjani does not deny he was a founder of the Alt-Right Corporation, along with Richard Spencer, and referred to it as his “brainchild.” In this blog post, Jorjani said he resigned after the “comments sections of our website devolved into a cesspool filled by the most despicable pond scum, former 4-chaners who would routinely pile on in trolling attacks against me every time I published something with a bit of intellectual content.”

As for Jorjani’s teaching career, The Vector campus news outlet reports that “according to the institute’s course schedule, Jorjani had been instructing two introductory STS lecture courses alongside one senior seminar in Humanities and Social Sciences called The History of Ideas, totaling approximately 125 students.”

Students in his classes report he did not bring his personal opinions into the classroom.

Donnell Recuerdo, a senior at the school, seemed surprised to discover that this was happening to Jorjani, telling The Vector, “I was pretty shocked because he never expressed his views while he was teaching… I was surprised this was the same guy.”

“Whenever the topic of politics or anything controversial was brought up, he made it a point of not discussing it in class,” said Aneesh Muthiyan, another senior in one of Jorjani’s class.

His year-end evaluation scores – which are submitted by students – show no evidence of his using his classroom as a platform for his beliefs, reports The Vector.

Jorjani, in his post, refutes the context of his words in the video, saying he was referring to a “nightmarish prediction of a future that would follow from Western policymakers’ failure to address the Muslim migrant crisis.” He said he was made to look like he is advocating for “concentration camps and expulsions and war…at the cost of a few hundred million people.”

In an email to The College Fix, New Jersey Institute of Technology News and Media Relations Manager Tanya Klein confirmed that Jorjani is under review by the administration and has been placed on administrative leave until the review is over.

The “statements made by Jason Jorjani in a video published by The New York Times are antithetical to our institution’s core values,” Klein said in the email.

Klein said that they have been aware of Jorjani’s controversial political beliefs for nearly a year and “have made no effort to quell his speech.”

“We all are entitled to our personal beliefs,” Klein said.

The apparent distinction is a possible interpretation of the video that calls for violence.

“We have not and will not make any determination regarding Dr. Jorjani’s permanent status at NJIT until we have completed a full review of the matter and all available information related to this situation,” Klein said.

“The nexus of free speech and hate speech often is a space where opinions diverge and emotions become intense. We presently are dealing with a situation where such a nexus has been created,” Klein added.

MORE: U. of Minnesota advises students on how to battle ‘alt-right’