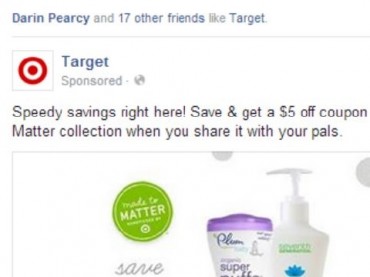 Have you ever wondered why your Facebook news feed is crammed with seemingly random advertisements, news, and odd social interactions?

One professor set out to explain this phenomenon – and what he’s uncovered isn’t reassuring.

“This isn’t an abstract problem like a long-term threat to democracy, it’s more like a mugging — or at least a confidence game or a fraud. It’s violence being done to you right now, under your nose,” the professor posted on the Social Media Collective research blog. “Just click ‘like.’ ”

Giving a speech at Harvard University on the topic recently, the professor put it this way: “We have built a system that often serves a commercial interest that is often at odds with our interests.”

And while it’s not just Facebook using crafty maneuvers, your news feed is as good a place as any to detail such tactics.

“Perhaps we should expect all systems to be rigged or misbehave in some way,” Sandvig said in an email to The College Fix.

As any Facebook user has noticed, advertisements are prevalent in the news feed. From “featured” content to “suggested” and “sponsored” stories, Facebook bombards us with information. Often it tells us what our friends have liked. Frequently a post will remain in our news feed long after others have disappeared. There is a method to the madness.

According to Sandvig, Facebook has made the predetermination that if a user “likes” something, that user therefore “likes” all future content from that page. So even if there is a post by that page years later, no matter what it says, it will have a ringing endorsement from the same user who clicked “like” on that page however many years ago.

In addition, Sandvig writes, even if a user “likes” a comment on a shared link, Facebook considers that to be a “like” for wherever the link takes you.

Due to these algorithms that Facebook uses, dead people can even give an endorsement for current news stories on Facebook.

“… Facebook’s business model is to produce attention for advertisers, not to help you — silly rabbit,” Sandvig explained. “So they must have felt that using your reputation to produce more ad traffic from your friends was worth the risk of irritating you. Or perhaps they thought that the practice could be successfully hidden from users — that strategy has mostly worked!”

These actions “serve Facebook’s goals at your expense,” Sandvig argues, detailing his list of peeves:

When I express my opinion about something to my friends and family, I do not want that opinion re-sold without my knowledge or consent.

When I explicitly endorse something, I don’t want that endorsement applied to other things that I did not endorse.

If a list of things is chosen for me, I want the results organized by some measure of goodness for me, not by how much money someone has paid.

I do not want my information technology to sort my life into commercial and non-commercial content and systematically de-emphasize the noncommercial things that I do, or turn these things toward commercial purposes.

The bottom line is, if you use online services such as Facebook, Twitter, YouTube, or Google, you can expect these companies to use what you say and post without your consent in ways in which you don’t necessarily approve.