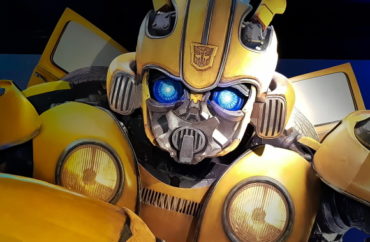 Newton Howard asks, ‘One should not be told what to do in his own house, right?’

A Georgetown University research professor is facing off against the Old Georgetown Board, and the fate of the whole world may be at stake.

The whole world as represented by Michael Bay movies and 1980s cartoons, that is.

Newton Howard is a professor of neuroscience and artificial intelligence at Georgetown. He placed two statues made of repurposed machine parts outside of his Georgetown home. They are likenesses of the Transformers characters Bumblebee and Optimus Prime.

Bumblebee and Optimus are Autobots, the pro-humans of this morphing machine species from outer space on the cartoon that was spun out into a successful live action summer movie franchise.

Many people have enjoyed the 10- and 6-foot-tall statues, respectively, but some neighbors see them as an eyesore, reports the Georgetown Voice.

NEWS: "The controversy over the sculptures, he argues, raises deeper questions about how people think about the relationship between history and futuristic technology."

Read about Professor Howard's endeavor to keep Transformers in the neighborhood: https://t.co/YdzWtyaUQC

What is the role of public art? @STIAGeorgetown major Besart Copa (SFS'22) discusses @Georgetown Professor Newton Howard's "provocative" Transformers sculptures and what they tell us about taste, and ourselves: https://t.co/yMecdcTQf2

The Georgetown Advisory Neighborhood Commission denied Howard’s permit request because he did not first seek the approval of the Old Georgetown Board panel, which “advises the federally-appointed U.S. Commission of Fine Arts on project designs to ensure that they fit the historical nature of the Georgetown neighborhood,” the Voice reports.

Howard was a little bit taken aback by this.

“One should not be told what to do in his own house, right?” he told the Voice.

Lisa Palmer, who sits on the Georgetown Advisory Neighborhood Commission that denied Howard’s permit, and who some critics might suspect of being in league with the Autobots’ hated foes the Decepticons, argues that the way Georgetown is zoned, the area in front of one’s house is “actually public space” and thus subject to bureaucratic veto.

After some public pressure in the professor’s favor, the Old Georgetown Board sent him an email expressing “regret that work commenced without permit” but nevertheless giving him the right to keep the statues posted for roughly the next five months.

The Voice reports that “Whether Howard continues the fight for permanent approval remains to be seen,” but that would seem almost a foregone conclusion given what else the paper divulges.

“Howard is currently working alongside the [U.S. Commission of Fine Arts] to place 16 additional Transformers around the District, funded by the Howard Brain Sciences Foundation which was established by the professor in 2011,” the Voice reports.

The professor has a serious reason for doing this.

“Howard hopes to de-stigmatize seeking help for mental health by raising awareness about the technology-based therapies that exist,” the Voice reports.

But other people support the statues for less high-minded reasons.

One eight-year-old wrote Howard a letter asking him to keep fighting for the Autobots at his front door.

Howard also observes that the statues have provided momentary “relief” to many parents looking for something to entertain their children during the COVID-19 pandemic.

MORE: Here are cartoons and kids’ movies the left has denounced as problematic, so far