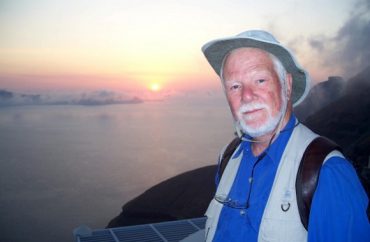 At least one professor in America does not feel the Bern.

University of Massachusetts Dartmouth Professor Jack Stauder says his political and ideological conversion away from socialism and Marxism occurred when he actually witnessed these systems in action.

After traveling to more than 110 countries to pursue various forms of research, notably cultural anthropology, Stauder described his conversion from Marxism as a process of disillusionment.

“I gradually became disenchanted with Marxism by visiting many of the countries that had tried to shape their societies to conform to its doctrines. I was disillusioned by the realities I saw in … socialist countries – the USSR, Eastern Europe, China, Cuba, etc,” Stauder told The College Fix via email.

“I came to recognize that socialism doesn’t work, and that its ‘revolutionary’ imposition inevitably leads to cruelty, injustice and the loss of freedom,” the professor continued.

“I could see the same pattern in the many failed left-wing revolutions of Latin America and elsewhere. By combining actual travel with the historical study of socialism and revolution, I succeeded in disabusing myself of the utopian notions that fatally attract people to leftist ideas.”

“Returning to my roots also helped my transition away from the leftist ideology that exists in the intellectual atmosphere of university life,” Stauder noted. “By spending my summers in the Southwest in the company of rural working people, farmers and ranchers, I developed perspectives on the real world very different from those that prevail in the academic world.”

Academic institutions are breeding grounds for leftist ideals, according to Stauder, as “academics in general are intellectuals, and hence susceptible to ideologies.”

“People seem to feel the need to believe in something, and when intellectuals abandon traditional religion, as most have done, they tend to seek substitutes,” Political campus movements against the Vietnam war in the 1960s and 1970s inspired Stauder’s initial interest in leftist political ideals. For many years, he identified as a Marxist and a radical.

These protests were common and influential on the campuses where he studied and worked, notably that of Harvard College. There, Stauder began his undergraduate career studying American history and literature and eventually switched to cultural anthropology after working with a Maya community in Chiapas, Mexico. This experience inspired him to pursue a Ph.D. in anthropology at Cambridge University in England.

Stauder’s most recent research bridges anthropology and ecology and he recently published The Blue and the Green: A Cultural Ecological History of an Arizona Ranching Community.

When asked about the current bias in academia, Stauder pointed to the overwhelming amount of research confirming a leftist bias.

“Academia has developed its own culture, a subset of the wider elite culture of the ‘new upper class’ (see Charles Murray, Coming Apart). As in all cultures, pressures exist to conform one’s thoughts and actions, and those who do not conform tend to be marginalized or suppressed,” Stauder said.

Though it may be challenging, Stauder encourages professors simply to “be individuals. Seek the truth, and stand by it.”