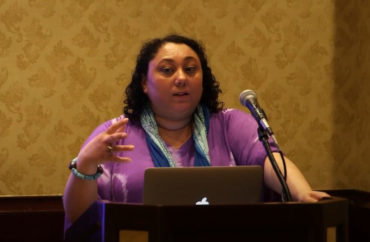 A University of Massachusetts Dartmouth criminology professor who once authored an academic paper on “Black Feminist Hauntology” said she believes students should not be allowed to take field trips to prisons as it might “harm” prisoners.

The College Fix recently acquired a recording of an online seminar attended by academics throughout the nation in which Viviane Saleh-Hanna said she had recently been involved in a debate about whether students should be allowed to go on prison tours “as an educational thing.”

“Many of us took the stand that said no, that’s really harmful to prisoners, to be looked at like animals in a zoo kind of visit, that really hurts them,” Saleh-Hanna said at the June meeting. “So does educating students allow us to hurt prisoners in this way?”

“Can we educate about prisons without harming prisoners?,” Saleh-Hanna said her discussion group asked. “And we concluded ‘yes’ — we can absolutely educate students without demeaning and demoralizing and embarrassing prisoners who are already in prison and dealing with that trauma.”`

Saleh-Hanna also weighed in on a story told by another seminar participant who relayed an anecdote about a white, Jewish lecturer who had used the “n-word” in a classroom while reading from a historical text.

“Articulating that word in class is a threat,” she said. “Black people are threatened when this word is articulated because the word is associated with sights of lynching and sights of mass violence. There’s examples of that — you know, the ‘c-word’ as a threat against women’s bodies and all of these words come with this social context and this really intensely violent, militarized context. It’s sort of, in many ways, carrying people’s bodies as a threatening thing. Even beyond demoralizing, it’s threatening.”

“I believe in the ‘do no harm’ approach — obviously that’s part of what medical doctors do — but as an educator, I believe ‘do no harm’ is the base standard for me,” she said.

The College Fix reached out to Saleh-Hanna for comment, but received an auto-response saying she would only be replying to emails coming from students and supervisors within a number of select programs.

She also noted she is on sabbatical until the spring 2022 semester.

Saleh-Hanna received her Ph.D. at Indiana University in 2007, where her doctoral research was on “Crime, Resistance and Song.”

According to her biography, her research focused on “tracing the Cross-Atlantic slave route through lyrics,” highlighting “the world views artists contribute to struggles for justice in Nigeria through Afrobeat, Jamaica through Reggae and the United States through Hip Hop.”

But Saleh-Hanna’s most notable research product came in the form of a 2015 academic paper which studied “hauntology and the sociological study of ghosts, historic memory, abusive structural relationships and works inspired by Toni Morrison’s and Octavia Butler’s novels.”

“Hauntology,” writes Saleh-Hanna, “is a socio-philosophical study of ghosts through whom we can locate the abusive and morally bankrupt nature of structural race relations as they manifest through the violent race-making and land-grabbing conquests of colonialism.”

Her argument appears to posit that the collective memory of slavery creates “ghosts” that haunt future generations.

“I present Black Feminist Hauntology as an emergent consequence of penal colonialism and introduce shape-shifting methodologies that transcend the structural powers of subjugated knowledges enabling a metamorphic liberation of colonized and enslaved bodies beyond the ‘creatures’ existing only within White institutionalizing fantasies of Black personhood,” Saleh-Hanna writes in the paper.

Through Black Feminist Hauntology we reach beyond the identity/body forming powers of colonizers and captors to produce a more appropriate critique of them, their colonizing ways, their moral bankruptcy and their varying systems of enslavement…

With each generation of White scholars reproducing scholarship easily located within White supremacist power and abuse emerges the ensuing legacies of colonial violence and the attempted (but not fully successful) extermination of all that is not White, or not yet White. So, yes: the sociological ghost I call upon is a Black feminist. She is the voices and the intellectual contributions of Black women who have known and seen that which has not been articulated or documented in White-ologies. She (and her descendants) is a Black woman who lived hundreds of years ago on plantations, beneath the boots and belts of White men and their wives, and she (and her descendants) is the Black woman who lived thousands of years ago in societies and worlds predating racial colonialism and chattel slavery. She is the transcendent shape-shifter I locate below and she has produced metamorphic and structural shape-shifting, tools for the exorcism I invoke here.

Hanna-Saleh receives mixed marks from students commenting on her “Rate My Professors” page, with some complaining her class is too difficult and others praising her attention to her students.

“She is a great professor and honestly cares about her students,” wrote one user. “I had her for an advisor and she helped me tremendously with staying in school and acquiring financial aid. I wouldn’t do most of the readings but if you just listen to her in class youll [sic] be fine.”

“The worst class I have ever taken in college,” wrote another user. “Her lectures are only her personal beliefs. Most of the topics don’t have to do with criminology. You can try to argue another way but good luck. The class should be called why white people are awful and class of racism instead of criminology.”