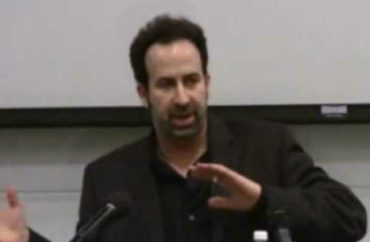 Tufts University is refusing to answer questions about a “Colonizing Palestine” course taught by an anti-Israel activist who is listed as a member of a group that supports violence against Israeli civilians.

Prof. Thomas Abowd doesn’t want to talk about his course either, telling The College Fix in an email that he would call the police if contacted again.

“Colonizing Palestine” shows up on the fall course list for two programs, Colonialism Studies and Women’s, Gender, and Sexuality Studies.

While pro-Israel activists have criticized Tufts for offering the course, citing both its reading list and its instructor’s background, they have not questioned Abowd’s academic freedom to teach the subject.

“This course will explore the history and culture of modern Palestine and the centrality of colonialism in the making of this contested and symbolically potent territory,” the course description reads.

It does not mince words on its view of Israel, which “illegally occupies Palestine”:

Students will examine the region in which Palestine is embedded through a range of path breaking writers, filmmakers, and thinkers. … Themes covered include notions of nationalism and national identity, settler-colonialism, gender and sexuality, refugee politics, cultural hybridity, class politics, violence, and memory.

The theme of “gender and sexuality” would explain why the course is listed in the Women’s, Gender, and Sexuality Studies curriculum, though “Colonizing Palestine” is the only course on that list (below) with no obvious connection to the program in its title.

WGGS Program Director Hilary Binda and Administrator Audrey Aduama did not respond to multiple Fix messages asking why their program is offering the course. A report by a pro-Israel group last year found that gender studies is a hotbed for anti-Israel boycott, divestment and sanctions activism.

The “writers, filmmakers, and thinkers” that students will study have a history of demonizing Israel and advocating for Palestine. It includes Anton Shammas, Emile Habiby, Edward Said, Suad Amiry, Mahmoud Darwish, Naomi Nye and Suheir Hammad, among others.

After the September 11 terrorist attacks, Hammad wrote in a poem that she couldn’t “forget u.s. transgressions” and “if there are any people on earth who understand how new york is feeling right now, they are in the west bank and the gaza strip.”

Darwish talked about eating Jewish flesh and wrote a love poem to the Palestinian state. Nye compared Ferguson, Missouri – the site of racial riots after the fatal police shooting of an unarmed black teenager – to Jerusalem.

‘Do not contact me again or I will call the police’

Prof. Abowd’s history and activities are profiled by Canary Mission, an anonymous pro-Israel organization that creates dossiers on North American students, professors and staff who “promote hatred” of Israel and Jews on campus.

It focuses particularly on social media. Twitter has twice suspended and reinstated Canary Mission’s account in the past two years.

Canary Mission calls attention to Abowd’s boycott, divestment and sanction activism and affiliations, particularly with Students for Justice in Palestine and the Palestinian Youth Movement. Much of the listed activity is from 2015.

When Tufts’ SJP chapter hosted “Israeli Apartheid Week” in 2015, Abowd told one event that “apartheid” exists both at Tufts and in Boston, Tufts Daily reported. “We are going to concentrate on what is routinely neglected and silenced.”

In a Tufts SJP Facebook comment that remains public as of Monday night, Abowd mocked the idea that there could be “anti-Semitic hate” in comments such as “Israel was a state built by White Jewish men for White Jewish men” and “Zionism is white supremacist.”

He has been a member of the Palestinian Youth Movement’s Facebook page since 2012, according to his listing on the group’s page.

The group gives tips on hosting BDS events and has celebrated violence against Israeli civilians, according to Canary Mission: “On October 25, 2015, PYM called to support ‘intifada’ during a period when Palestinian radicals across Israel stabbed and hacked to death scores of Israeli civilians.”

Abowd also mocked the Hebrew Bible as a “celestial real estate guide” at a 2015 event in Washington, according to FrontPageMag.

Asked for the backstory on the course and how Abowd will ensure it’s not a one-sided, anti-Israel screed, Abowd questioned whether The Fix or Richman knew the meaning of “screed.” He continued: “Do not contact me again or I will call the police.”

‘Does not imply endorsement of a particular view’

The Colonialism Studies program lists both a “program director,” Prof. Amahl Bishara, and a “director,” Prof. Lisa Lowe. The Fix contacted both to ask who oversaw Abowd’s course, how it came about and how they would ensure the course is fair.

Lowe said she didn’t know because she’s no longer the director of the program. Bishara referred The Fix to Patrick Collins, executive director of public relations at Tufts.

The Fix asked Collins how Tufts plans to ensure that Abowd’s course doesn’t create a hostile environment for Jewish and pro-Israel students, particularly since a former pro-Israel activist, Kenneth Marcus, is now in charge of civil-rights investigations at the Department of Education.

Collins emailed The Fix the same message he gave Richman for the Jewish News Syndicate article:

As an institution of higher education, Tufts is committed to the free exchange of ideas. The university’s courses represent a broad spectrum of ideas and topics that enable students to become familiar with a variety of perspectives on important and complex issues facing our global society.

Just because the discussion of these issues is “University-facilitated … does not imply endorsement of a particular view, and we anticipate and welcome the Tufts’ community’s vigorous discussion of varying viewpoints and beliefs,” Collins said. He did not acknowledge that the course description says Israel “illegally occupies Palestine.”

“The university offers a number of courses in Judaic Studies, political science, and diplomacy that have explored topics and issues involving Israel in recent years,” he wrote.

One course that shows Tufts is open to other perspectives is available to both undergraduates and graduate students through The Fletcher School of Law and Diplomacy, Collins said.

The course description for “Negotiation and Mediation in the Israeli-Palestinian Conflict: Past Lessons and Future Opportunities” says the first half reviews “the conflict’s historical developments since 1948” and “theories of negotiation, mediation, and conflict resolution.”

The second half features “high-ranking guest speakers from the U.S., Israel, and the Palestinian territories in an effort to give students formal and informal opportunities to interact with professionals who have had first-hand experience negotiating or mediating in this conflict.”

Tufts Hillel, a center for Jewish students on campus, did not respond to multiple Fix requests for its thoughts on Abowd’s course, Hillel’s history with Abowd and the Colonialism Studies program, and what the course says about the broader climate for Jewish student at Tufts.

MORE: Is it anti-Semitism to coerce Jewish students to denounce Israel?