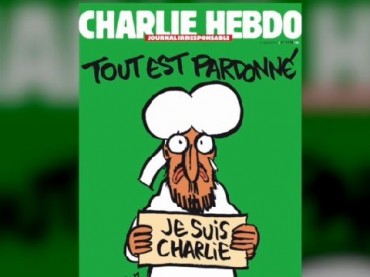 Students and others claimed caricature of prophet is ‘very offensive,’ should not be allowed

University of Minnesota faculty members were asked earlier this year to take down posters advertising an academic panel because they included an “offensive” recreated cartoon picture of Mohammed – the one made famous by Charlie Hebdo earlier this year.

The posters had advertised a panel discussion by various professors as well as a Minneapolis Star Tribune newspaper cartoonist. Co-sponsored by a dozen academic departments in the College of Liberal Arts following the attack on the French satirical magazine Charlie Hebdo in January, it was titled “Can One Laugh at Everything? Satire and Free Speech After Charlie” and intended to generate an academic discussion of the tragedy and its consequences.

Flyers promoting the event featured the now-infamous image of the prophet as it was printed in Charlie Hebdo. The word “censored” was stamped in red diagonally across the cartoon image.

The organizers discussed whether or not to put the cartoon image of Mohammad on the flyer, but eventually decided it would be appropriate given the subject of the event—free speech and satire, Inside Higher Ed reported this week. But after the flyers were distributed online and hung around campus, some members of the Muslim student community wanted them taken down.

In phone calls and a petition, nearly 275 people complained to the campus Office of Equal Opportunity and Affirmative Action, calling the flyer “blasphemous” and insulting to Muslims, the Minnesota Daily campus newspaper reports. The complainants included students, faculty, a retired professor and random individuals unaffiliated with the university, who called the flyer “very offensive.”

The petition read in part that the flyer “violated our religious identity and hurt our deeply held religious affiliations for our beloved prophet (peace be upon him). Knowing that these caricatures hurt and are condemned by 1.75 billion Muslims in the world, the university should not have recirculated/reproduced them.”

These complaints prompted an investigation by the Office of Equal Opportunity and Affirmative Action, which ultimately found that while the Mohammad cartoon did not violate university anti-harassment policies, the use of the image illustrated poor judgment and the college’s dean, John Coleman, should voice disapproval of the flyer, the Daily reported.

Moreover, a few weeks after the event, College of Liberal Arts human resources officials contacted faculty members and college leaders to notify them of the complaints and request any remaining flyers – physical and online – be removed.

The request stated: “Due to complaints about the image contained in the link, [the equal opportunity office] has requested that the image be removed from any [college] communication in all forms. If your unit still has active links to this page, or image, please remove the image. Please remove any posters on your unit bulletin boards or any other hard copies of flyers that may be still around,” according to emails obtained by Inside Higher Ed.

Though the office determined the flyers did not violate university policy, constitutional law professor Eugene Volokh, in The Washington Post, notes the email sounded “like an instruction, not a request.”

“So public university administrators were instructing staff members — ‘please’ in an e-mail from administrators to staff members sounds like an instruction, not a request — to take down images related to academic events, because those images are seen by some as blasphemous,” Volokh wrote. “This was not just some general rule that all promotional flyers be removed from physical bulletin boards after the event was done, so people can better focus on upcoming events. This was an order to remove material precisely because of the images that it contains, images that members of one religion find offensive.”

Several faculty members had similar opinions and asked for clarification. Dean Coleman wrote a letter describing the “paramount values” of free speech and told faculty, “whether you decide to remove the advertisement is your call.” But even after this reassurance from the dean, free speech concerns at the University of Minnesota remain.

The Foundation for Individual Rights in Education released a statement May 5 noting that while the Office of Equal Opportunity and Affirmative Action “correctly concluded that the flyer does not constitute harassment, it shouldn’t have taken a public university so long to make that determination.”

“FIRE hopes that … professors and the rest of the UMN community aren’t dissuaded from continuing conversations about Charlie Hebdo or any other topic they wish to discuss. As always, those who object to the CLA’s programming or advertising should respond with their own expression, rather than enlisting the university to employ censorship.”

But faculty members are worried this incident will dissuade future controversial expression.

The panel’s co-organizer and French and Italian Professor Bruno Chaouat told Inside Higher Ed  “…there’s been a lot of self-censorship in the aftermath of the Charlie Hebdo attacks and I’m afraid we’re on the path here as well.”

Added Volokh: “This incident shows just how broad the movements to suppress alleged blasphemy are, even in the U.S. This wasn’t a fringe group of anti-Islam political activists putting out the flyers; these were people squarely in the middle of the academic Establishment.”

“This wasn’t a bunch of cartoonists putting out material that, viewed narrowly, might be seen by some as juvenile, nonsubstantive, or gratuitously offensive; these were academics putting on a substantive academic event with a flyer that is clearly and directly tied to the content of the event, and that depicts an image that has undoubted historical significance.”