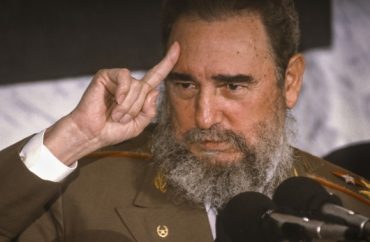 In the wake of the death of Cuban dictator Fidel Castro, several college professors defended his legacy and praised the man for what they described as his vision, courage and strength against colonialism, capitalism and racism.

Take Erik Loomis, a history professor at the University of Rhode Island, who in his blog post “Castro: It’s Complicated!” argued against thinking about Castro “in terms of simplistic moral judgments.”

Loomis instead sees Castro as “a tremendously complex person who attempted to rebuild a society around ideas of justice while also refusing to allow democratic institutions to form.”

He goes on to point out that Castro brought “outstanding medical care and education to his own people and the poor around the world while limiting the ability of educated people to use their skills at home.”

He called Castro, along with Che Guevara and Ho Chi Minh, “an inspiration for billions of people around the world seeking freedom from colonial overlords.”

Writing in the New York Daily News, Ronald Howell, an English and journalism professor at Brooklyn College, argues that “Castro was the most dedicated and powerful proponent of racial justice the world has ever known.”

Howell cites Castro’s meeting with Malcolm X in the 1960s and his decision to send troops to fight apartheid in South Africa in the 1980s.

“Through the turning of the last century, Cuba remained a significant presence in Africa, providing medical assistance and trying to strengthen diplomatic bonds,” Howell writes. “No wonder all this never received coverage in the U.S. media. It would have made the United States look weak in its assertions that it treated all fairly.”

Michael Erisman, professor of political science and a Cuban foreign-policy specialist at Indiana State University, told the Star Tribune that he always thought a popular Robert Frost poem would make a great epitaph for Fidel Castro: “Two roads diverged in a wood and I, I took the one less traveled by and that has made all the difference.”

“He definitely took the road less traveled by and in the process led a remarkable life,” the professor said.

Althea Spencer Miller, an assistant professor at Drew University, mourned Castro’s death in a lengthy Facebook post, suggesting he brought humanity and progress to the country.

“His complex life and politics were vilified here in the US. But for me as an anglophone Caribbean person, he represented the provision of educational opportunities through scholarships, health opportunities, and national, social, and cultural opportunities. Those opportunities were delivered without financial strings attached, did not increase the indebtedness of our countries, nor create political servility to his ideology,” she wrote. “… A complicated, contradictory human being has passed. Undoubtedly, he improved the lives of many actually forcing upon them the conditions for that improvement. There is much still to be done in Cuba but he took that country way beyond what it had been under the former tyranny.”

Others, such as PhD candidate Michael Oman-Reagan of the Canada-based Memorial University, highlighted statements of those who paint Castro as a martyr, tweeting out a Democracy Now post that stated: “Cuba is the only country in the world that sent its soldiers to confront the army of apartheid.”

“Cuba is the only country in the world that sent its soldiers to confront the army of apartheid…” #Fidel https://t.co/Q9eEyuKBSq

“He had these piercing eyes and a piercing mind. When he shook my hand, he really looked at me. I remember being in the very powerful presence of a person who obviously had a lot of charisma, she told the Atlanta Journal Constitution in recalling her meeting with the dictator in 2006.

Denise Baden, an associate professor at the University of Southhampton in the UK, says that Cubans are actually mourning the death of Castro, seeing him as a father figure.

“They’re aware that many of them wouldn’t even be here if it hadn’t been for the health advances and equalization of resources that he provided,” she told the BBC. “Some of them blame Castro for the hardships they went through while others blame the US embargo…I think most people blame the embargo.”

Recounting a story she heard from a Cuban immigrant about how the police would at worst detain people unhappy with Castro for a day, she said people speak much more freely in Cuba than the mainstream media purports.

“I don’t think political prisons are okay, and I don’t think persecuting gay people is okay,” Baden said. “What I’m disputing is that Fidel Castro of Cuba was any worse than any other country. If you expose America to the same lens you’d have a stack of crimes that would overshadow what Fidel Castro has done.”

Editor’s note: This article has been amended to reflect Michael Oman-Reagan is a PhD candidate and to correct the spelling of Professor Loomis’ name.

MORE: Cuba-loving professors — I dare you to read this