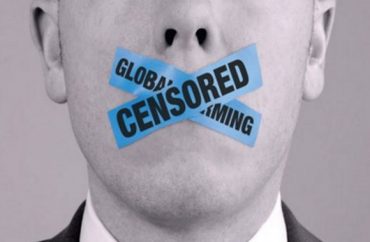 ‘We will not, at any time, debate the science of climate change’

Three professors co-teaching an online course called “Medical Humanities in the Digital Age” at the University of Colorado-Colorado Springs recently told their students via email that man-made climate change is not open for debate, and those who think otherwise have no place in their course.

“The point of departure for this course is based on the scientific premise that human induced climate change is valid and occurring. We will not, at any time, debate the science of climate change, nor will the ‘other side’ of the climate change debate be taught or discussed in this course,” states the email, a copy of which was provided to The College Fix by a student in the course.

Signed by the course’s professors Rebecca Laroche, Wendy Haggren and Eileen Skahill, it was sent after several students expressed concern for their success in the course after watching the first online lecture about the impacts of climate change.

“Opening up a debate that 98% of climate scientists unequivocally agree to be a non-debate would detract from the central concerns of environment and health addressed in this course,” the professors’ email continued.

“… If you believe this premise to be an issue for you, we respectfully ask that you do not take this course, as there are options within the Humanities program for face to face this semester and online next.”

The professors also note this ban on debate extends to discussion among students in the online forums. Moreover, students who choose to use outside sources for research during their time in the course may select only those that have been peer-reviewed by the Intergovernmental Panel on Climate Change, the email states.

Professors Laroche, Skahill, and Haggren did not respond to email inquiries from The College Fix seeking further comment on their email or their stance on debate in their online class.

The University Communications Director Tom Hutton told The College Fix via email that “Humanities 3990 is a special topics course with multiple choices for students to take when fulfilling requirements.”

“By clearly stating the class focus,” he continued, “the faculty are allowing students to choose if they wish to enroll in the course or seek an alternative. Additionally, the faculty who are leading the course have offered to discuss it with students who have concerns or differing opinions.”

In addition to teaching man-made climate change, the course also delves into the “health effects of fracking,” according to its syllabus.

The reading assignments in the fracking section focus on only its negative impacts and fail to present the other side of the issue, namely the possible benefits of fracking.

An activity assigned within that section instructs students to take a test to measure their own carbon footprint. The purpose, reads the syllabus, “is not to create guilt or shame, though those emotions are entirely common.”