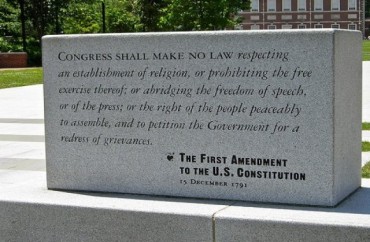 American free speech is a wonderful thing, even when the speech is stupid

Free speech is indeed the great American right; our freedom of speech regime is perhaps the most liberated in the world. It is exceedingly difficult to get in trouble for saying something in America. This is a good thing.

It’s a good thing even when the speech in question is irritating, hateful or profoundly stupid. Such was the case recently at the University of Georgia, where the college’s Young Democrats called for the beheading of congressional Republicans. The group of students was actually playing off of a professor’s earlier call for the firing-squad execution of Republicans. Both the professor and the students were demanding that Republicans be killed due to their efforts to repeal Obamacare and replace it with Trumpcare. (It seems to be an accepted part of the American political order that the Left, when confronted with politics they don’t like, will often quickly and happily resort to violence or the threat of violence.)

There are several ways to look at this incident. On the one hand, this is simply an instance of childish political hysterics, something the American body politic must deal with every time there’s a Republican in the White House. On the other hand this kind of thing could be an indication of a much more deep-seated political dysfunction, a sign that liberals are increasingly incapable of operating within the bounds of normal, healthy, rational political discourse.

But more broadly—and more importantly—we might look at this stupid dust-up as a key indicator of the free state of American speech and expression. The level of protection that speech is afforded in this country is frankly astonishing, not just compared to the tyrannies and tinpot dictator republics across the globe but even when stacked up against the relatively enlightened countries of Western Europe and the member states of the British Commonwealth. When a university professor and a group of college students can espouse this kind of reprehensible rhetoric free from the fear of prosecution, it says something special about our country (even as it says something rather dismal about the state of progressive politics).

Our college campuses, of course, have in recent years become hotbeds of censorship and anti-free-speech agitation, though such efforts have primarily been directed at conservative speech: if a right-wing professor or a group of College Republicans had made these comments, you can be assured that the Office of Civil Rights would be mounting several investigations into the matter, and the campus mobs would have instituted a 24-hour vigil against the offenders. Culturally and sometimes legally, free speech is often a one-way street at American universities, and that is a disgrace. But in the country at large, we are more or less entirely free to speak our minds. And that is a blessing.