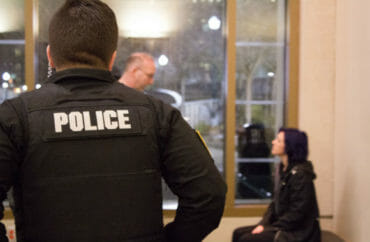 PORTLAND, Ore. – Protesters didn’t want the audience to hear any more of James Damore’s views on gender and career pursuits, so they pulled the plug on him – literally.

Aside from a 10-minute outage to the sound system and police pulling aside a protester, Saturday night’s Portland State University event with the fired engineer behind the so-called Google memo went smoothly.

Freethinkers of PSU hosted “We Need to Talk about Diversity,” which drew more than 200 people, including some from out of state and even out of the country, according to Andy Ngo, one of the organizers. (Ngo has previously written for The College Fix.)

The event also featured the husband-and-wife professors who left Evergreen State College in the wake of hostility toward their views on the school’s racially tinged “Day of Absence.”

Asked how he responds to the charge that he’s not an expert on the intersection of gender and career path, Damore told The Fix he’s “read significantly into this subject and was getting a science PhD before joining Google.”

“Also, attacking me is no substitute for addressing my arguments,” he said in a Twitter direct message before the event.

Fired in August for releasing his memo inside Google as a response to the tech company’s diversity program, Damore has not kept a low profile. Along with others he filed a discrimination lawsuit last month against Google that seeks class-action status.

Organizers said they received threats of violence and disruption for planning the event, leading them to “get creative” to protect Damore, Ngo told The Fix.

“The threats had to do with explosives,” said Ngo. Given the “sprawling” downtown campus and threat that people were “going to keep an eye out for [Damore] so they could assault him,” the organizers had to keep his presence “discrete.”

Freethinkers volunteer Blake Horner told The Fix that she and another volunteer had Damore and the other panelists enter from the back through a green room, with the blinds closed to prevent anyone from looking inside.

The university administration declined to release names of those suspected of making threats, citing student privacy. They included a student who claimed in a tweet he could shut off power to the venue through his building privileges, as Ngo wrote in a Wall Street Journal op-ed.

Ngo told The Fix he recognized one of the protesters based on comments online that included the person’s photo and face. Those who stuck around until Q&A included a few that Ngo recognized from the Freethinkers’ event last year with gay conservative journalist Chadwick Moore. He also noticed the university’s student body vice president in the crowd, Donald Thompson III.

MORE: Local media set up straw man to attack Damore ahead of event

Audience members were split between those who had reserved tickets and those who sought first-come-first-served tickets at the door. “From what I saw, it seems like around 100 people arrived with tickets, and around 150 people without,” said Horner.

The only thing resembling a protest outside Hoffman Hall was about half a dozen people holding posters showing women who had a major impact in science. Those who went into the venue had to leave behind their signs, which were prohibited inside.

“I’m a teacher, so I feel like [their activity was] not so much protesting, it’s just so much wanting to point out science,” Mary Watkins, one of the demonstrators parading in front of Hoffman Hall, told The Fix. “It is for females. There’s a long history of women scientists that just needs to be constantly represented.”

The protesters said they were not protesting Damore as much as they were trying to inform the people in the lines. A representative for PDX Women in Tech, which had publicly objected to the Damore event, told The Fix in an email that its members were not among those protesting.

Some people are holding signs of female scientists to protest “the misogynist message” in the Damore memo. pic.twitter.com/HedUM8cyRO

‘I’m being taped against my will’

Ngo introduced the speakers and promoted the Freethinkers’ next big event April 7, “From Radical to Rational.” It will feature Elham Manea, a Swiss-Yemeni professor of political science who was drawn into radical Islam at 16 years old, Ngo later told The Fix in a text.

Bret Weinstein, the former Evergreen State professor, asked those planning to walk out to keep an open mind and have a discussion, as he did when Evergreen State students confronted Weinstein in his office about his views on the Day of Absence.

“Folks on my side of this discussion are frustrated that, instead of challenging us and involving some dialog about these issues, which we all admit are difficult, what we get are tactical antics from people who don’t seem to be very sophisticated about strategy and it makes this uninteresting,” Weinstein told The Fix before he took the stage.

“It’s very easy to win an argument with an antagonist who won’t make their case,” he continued. “On the other hand, it would be much more fruitful if we actually had a dialog and faced the difficult part of the questions that are under consideration.”

Peter Boghossian, assistant professor of philosophy at PSU, read Damore’s claims about biological and psychological differences between the sexes verbatim from his memo.

The professor then questioned what was sexist in light of sensational headlines about the memo, such as from the local Willamette Week.

Right before the planned disruption, former Evergreen State professor Heather Heying – like her husband a biologist – said it shouldn’t offend people to hear that males and females have biological differences. She noted that men are taller than women on average.

Suddenly at 6:30 p.m., an audience member shouted aloud the time, and about half a dozen protesters stood up and walked out.

Heather Clark, a non-student protester participating in the walkout, tried yanking the cables out of the sound system as the protesters exited the room.

During that walkout, “some students walked by the sound booth and tried to pull the power and connectivity,” causing “minor damage,” Peter Sanchez of Portland State Professional Sound told The Fix.

Campus police officers finally made a move and took Clark aside, sat her down and took her information. While this happened, the sound system went down and the speakers were forced to shout until the connectivity was re-established about 10 minutes later.

Other walk-out protesters began recording on their phones as Clark was being questioned.

While Checkpoint Media filmmaker Mike Nayna attempted to capture the campus police with Clark, one of the remaining protesters stood in front of Nayna’s camera to block his view, trying to antagonize him.

‘Violent disruption’ was never the plan

“The campus police, as maligned as they are, are incredible men and women, very professional,” Ngo told The Fix after the event:

We’re very lucky to have their presence – they’re working overtime to make sure that the event can happen without anybody getting hurt. I’m glad the person who caused some of the damage was apprehended … I would hope that they’re dealt with appropriately under potentially the student conduct as well as even the law.

A spokesperson for PSU told The Fix in an email that campus police probably didn’t earn literal overtime for the event “because they put shifts up there for events like that.”

“I know that some were expecting a violent disruption,” protester Clark told The Fix in a Facebook message:

I don’t think that was ever on the table. Bottom line, people like James Damore are absolutely not welcome here. We must make that clear. A small walkout and some equipment damage isn’t saying much, but it’s a whole lot louder than nothing.

According to Clark, she was cited with criminal mischief in the second degree and banned from the campus for two years, but was allowed to walk out of the building freely.

Scuffle in the back and a person was taken into the lobby by Portland State police. #JamesDamorePSU pic.twitter.com/pIiVG9oIMT

CORRECTION: The original article included a typo in a quote attributed to Bret Weinstein. It has been fixed, and the context for the interview has been added.