‘Harmless and exempt from’ FERPA

A public university in Maryland is refusing to provide any information about two students investigated for allegedly harassing and assaulting Jewish fraternity members, claiming it would violate federal law.

The fraternity itself refuses to say anything about the alleged assailants, suggesting that they do not fit the stereotype of white nationalists or neo-Nazis.

In contrast to the University of Maryland’s reaction to the murder of a black student – including the creation of a “rapid-response team” to respond to bias reports – Towson University (below) is eager to downplay the Alpha Epsilon Pi incident as isolated.

A media lawyer questioned Towson’s excuse for silence, telling The College Fix that “basic demographic information is recognized as being harmless and exempt from” the Family Educational Rights and Privacy Act. 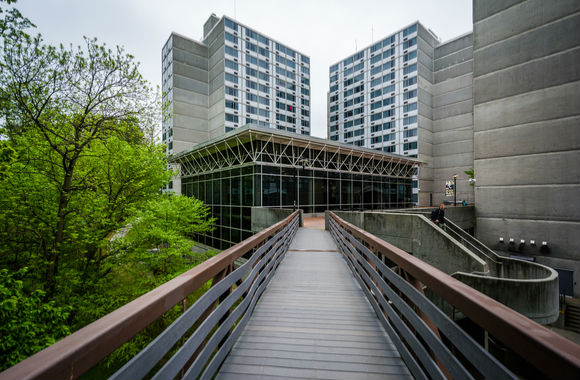 Two AEPi members were walking to the fraternity house near campus April 29 when they were reportedly harassed by two fellow students with profanity and racial slurs, including “fuck the Jews,” according to The Baltimore Sun. They were followed to their house, where one member was reportedly punched in the face.

Towson President Kim Schatzel released a statement regarding the “deplorable” assault, saying the university “does not tolerate acts of hatred” and that “any student found responsible for such conduct is subject to sanctions including suspension and expulsion from the university.”

Schatzel gave “my deepest assurances that these events will be treated with the utmost urgency by me and the Towson University administration.”

The university was put on the defensive by a Sun editorial that said Towson was “home to its own little corner of the white nationalist movement” – the White Student Union, which patrolled campus to report black-on-white crime several years ago – and suggested the AEPi attack could represent “a pattern of hate.”

In a joint statement in response, Schatzel and Baltimore Jewish Council Director Howard Libit said the attack “represents a deplorable but isolated incident” and they “do not believe a pattern of hate exists at TU.”

The AEPi incident is not listed on the university police’s crime log for April, all but two incidents of which are marked as “on campus.” One is marked “public property,” and the other, a fraudulent card transaction.

Towson’s Office for Inclusion and Institutional Equity defines “hate crime” as a “criminal offense committed against a person(s) or property which is motivated … by the offender’s bias towards the actual or perceived group member(s).”

For hate crimes, Towson students can “be punished with fines and/or imprisonment” after the crime is investigated by this office, police, residential staff, and the Office of Student Conduct and Civility Education. The equity office did not respond to requests from The Fix about whether it will release non-identifying information about the investigated students.

Fraternity won’t talk: Not its ‘right and responsibility’

Investigations by both Towson and the Baltimore County Police Department have now been closed, with neither revealing the identities of the alleged assailants. AEPi chose not to press charges against them.

AEPi spokesperson Jonathan Pierce told The Fix in an email the fraternity will neither identify the investigated students nor provide non-identifying information about them, because it does not “feel that that is our right and our responsibility to release.” Instead, the fraternity feels that it is for the “University and/or local authorities to release.”

When it announced the conclusion of the investigation, a spokesperson told the Sun that FERPA “restricts TU from disclosing the results of that investigation” but that both Towson “and the victims believe the process has yielded a fair result.”

Schatzel’s office did not respond to email inquiries from The Fix regarding the investigation or the decision not to share the alleged assailants’ identities or any other information about them.

Ray Feldmann, director of communications and media relations, also failed to return several phone calls and emails from The Fix seeking non-identifying demographic information about the assailants, such as their race, ethnicity or membership in particular groups or religious affiliations. Among Fix questions: whether such demographic information might inadvertently reveal the identity of the investigated students.

The Fix also requested public records from the Baltimore County Police Department media relations office on the hate-crime investigation and the alleged assailants, but has yet to receive the records.

MORE: Hoax? Noose allegedly spotted on UMD frat, but no evidence of it

“They did not show remorse at the time. They were basically not cooperative with the investigation” Baltimore County police on investigation into suspects in anti-Semitic attack on Jewish fraternity members at Towson University @wjz pic.twitter.com/lvDa2fj2Ps

‘All of that stuff should be publicly accessible regardless’

FERPA specifically allows colleges to give out “directory” information on students, and that includes demographics such as race and ethnicity, according to Frank LoMonte, former head of the Student Press Law Center and current head of the University of Florida’s Brechner Center for Freedom of Information.

The question in every FERPA judgment call is whether the situation, “including the identities of the students, [is] already so well-known beyond the students’ inner circle that the facts of the case cannot be released without unmistakably pointing to identifiable students,” LoMonte told The Fix in an email.

The “gray area” of student privacy law relates to the subjects of a “disciplinary investigation,” he said.

A school can confirm basic information about students if their names are already known. “[If] the suspects are Joe Jones and Tom Smith and you just say, ‘I’d like to know whether Joe and Tom are students here and what fraternity they belong to and what they’re majoring in,’” LoMonte said, “all of that stuff should be publicly accessible regardless of the existence of the disciplinary investigation.”