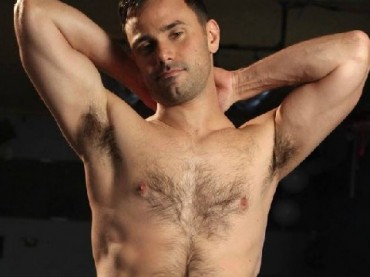 His talk was also partly autobiographical, saying he was first introduced to pornography when he was 7-years-old and his father accidentally flipped to the pornographic channel on television. Eventually he did find his first all-gay pornographic film, and told the crowd about that experience:

And so I see this and like they are having a good time and obviously it feels good and it goes on and it’s obviously out in the open and I hear them say these words that before were only insults, like ‘cocksucker,’ but it was actually like a cocksucker, calling the dude a cocksucker meant he was sucking a cock. To me, that was like great, that was like these words that were insults became elevated to the position of something erotic and pleasurable. And there were a bunch of scenes on the tape and that meant there were a lot of guys doing this somewhere in the world, having sex just sort of freely and openly with each other. So that was really important to me.

Fast-forward to today, and Habib said he gets support from all over the world, including from gay men in the Middle East who could be imprisoned or executed for their homosexuality.

And he gave some advice to the crowd – an equal mix of both female and male students – on how they, too, could explore their sexuality. He also talked in a broad general sense of being taught different lessons during life’s experiences:

Students in the audience appeared to enjoy the talk. They laughed at his jokes and there was applause as he ended his speech, one of several events put on as part of UW-Madison’s Sexual Health Week.

The weeklong observance is hosted by Sex Out Loud, a student organization with an annual budget of nearly $100,000 funded largely through student fees. Its focus is on “promoting healthy sexuality through sex positive education and activism,” according to its website.

College Fix reporter David Hookstead is a student at the University of Wisconsin.