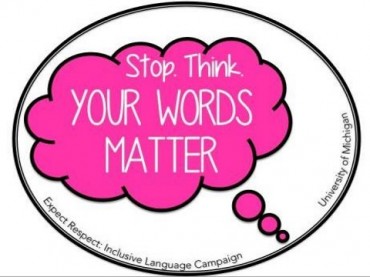 Dozens of posters plastered across the University of Michigan caution students not to say things that might hurt others’ feelings, part of a new “Inclusive Language Campaign” at the state’s flagship public university that cost $16,000 to implement.

Words declared unacceptable through the campaign include “crazy,” “insane,” “retarded,” “gay,” “tranny,” “gypped,” “illegal alien,” “fag,” “ghetto” and “raghead.” Phrases such as “I want to die” and “that test raped me” are also verboten.

University spokesman Rick Fitzgerald told The College Fix in an email the campaign aims to “address campus climate by helping individuals understand that their words can impact someone and to encourage individuals to commit to creating a positive campus community.” Though only in existence for one semester, the Inclusive Language Campaign has maintained a strong presence throughout the university. Students roaming the campus frequently encounter posters of all sizes reminding them: “YOUR WORDS MATTER,” and asking questions such as: “If you knew that I grew up in poverty, would you still call things ‘ghetto’ and ‘ratchet’?”

Representatives of the Inclusive Language Campaign did not respond to repeated requests for comment from The College Fix.

Junior Kidada Malloy, who helps promote the program on campus, told the Michigan Daily the campaign “is a great program because it will improve the day-to-day language of students on campus by providing education around words that are offensive.”

Fitzgerald told The College Fix the university budgeted $16,000 for the campaign. The program comes at a time when the university has raised tuition and fees for the last two consecutive years. “This program is intended to be educational, not regulatory,” Fitzgerald said of the campaign. “We hope there is only the understanding that we all participate in, and have the power to influence campus culture.”

ILC’s Facebook page includes a variety of inclusion-based material, inspirational quotes, personal stories, and even a video that details how to address a person by the correct pronouns. It operates in conjunction with two other campuswide initiatives, Expect Respect and Change It Up!, both of which emphasize inclusive words in and out of the classroom.

Students living in university housing are urged to take part in a Change It Up! workshop, which “brings bystander intervention skills to first-year housing residents for the purpose of building safe, inclusive, and respectful communities.”

Before and after completing these workshops, students fill out surveys in which they reflect on internal biases that may pose a threat to an “inclusive campus.”

As the Inclusive Language Campaign has enlarged its influence on campus through various kick-off events, interactive programming and provoking visuals, some students have called into question how it reconciles with the university’s policy on free speech, which “encourages open and vigorous discussion and strives to maintain an environment where the free exchange of ideas and opinions can flourish.”

Asked if the campaign stifles free speech, Fitzgerald said “we believe this program has just the opposite effect.”

“We believe it will make discourse more constructive by respecting the views and perspectives of others,” he said. “A campus conversation about the impact of words is good for everyone.”

The University of Maryland launched a similar campaign three years ago that cost $15,000.