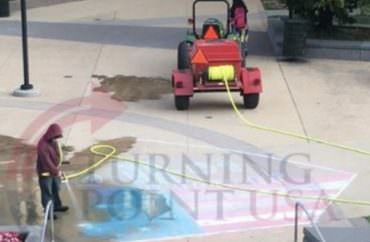 Like many, Cleveland State University’s Turning Point USA chapter wanted to recognize the 16th anniversary of the Sept. 11 terrorist attacks. So members of the pro-capitalist student group gathered Sunday evening to chalk a memorial onto the sidewalks of the public university’s campus, an exhibit that included an American flag with the words “No day shall erase you from the memory of time” under it.

However, the artistic memorial didn’t last long. Hours after it was created, the university removed it. An image tweeted by Charlie Kirk, founder of Turning Point USA, shows a maintenance employee washing away the memorial with a power washer this morning.

Tiffany Roberts, chapter president of CSU’s Turning Point USA club, told The College Fix that members of the chapter gathered around 6 p.m. Sunday evening to chalk a 9/11 tribute onto the sidewalks of the public university to honor those killed in the terrorist attacks. Roberts said that around 7:45 a.m. Monday morning, a university employee arrived at the memorial with a power washer and removed the memorial.

Today our @TPUSA group at Cleve. St. made a memorial to 9/11 victims

Not long after the school comes and POWER-WASHES to remove it!

“When we asked why he was destroying our tribute to the victims of 9/11, [the employee] informed us that he had been ordered to do so by the university’s Director of Facilities Maintenance, Shehadeh Abdelkarim,” Roberts said.

Roberts added the employee also told her the memorial was being erased because “there is no chalk allowed on campus.”

A university spokesman did not immediately return The College Fix’s requests for comment regarding the incident on Monday.

After talking with the employee sent to remove the memorial, Roberts said she went to the Dean of Students Office and attempted to meet with Dean Jim Drneck.

Executive Assistant to the Vice President of Student Affairs, Susan Greco, instead met with members of the Turning Point USA chapter and was “very vague” about the incident, according to Roberts.

The group “insisted” on a meeting with Drneck, but was told he was busy with meetings. Roberts said the group will instead meet with Vice President of Student Affairs, Dr. Ernest Yarbrough, this afternoon to discuss the situation.

Roberts expressed frustration about the removal of the memorial, which in part included an American flag and the words “Never Forgot” drawn above and as well as quote reading “No day shall erase you from the memory of time” written below the flag.

“I am extremely disheartened by this situation, as my members put a lot of hard work and time into the memorial and it is very disconcerting that the school would wash away something designed to honor the Americans who lost their lives on September 11th,” she said.

In a statement provided to The College Fix, the national arm of Turning Point USA said the organization is “deeply disappointed” by Cleveland State’s decision to “destroy” the 9/11 tribute.

“Furthermore, we are very concerned that administration is removing free speech from the publicly funded sidewalks of a publicly funded university’s campus,” the national organization added.