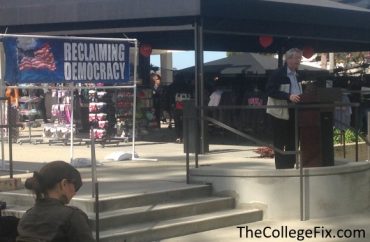 LONG BEACH, Calif. – President Donald Trump has fascist tendencies, is a misogynist, and his election victory has brought changes “not for the better,” several Cal State Long Beach professors told students Wednesday during a lunchtime teach-in on the campus quad.

The remarks came during “Fascism: Past and Present,” the second of four “Reclaiming Democracy” teach-ins organized by College of Liberal Arts faculty members “concerned about developments before and after the November election,” said Teresa Wright, chair of the Political Science department.

“We’re here today because a specter is haunting the world, and especially the U.S. and Europe, the specter of fascism and authoritarianism,” Wright said during her introductory remarks.

The teach-in lasted for an hour and half and included three faculty presentations, about 10 minutes each, followed by five breakout discussions. Pizza for the event was provided by the public university.

History professor Jeffrey Blutinger spoke on the definition of fascism, telling the approximately 120 attendees that fascism has long been a popular movement in history that appeals to the middle- and lower-middle class.

“What fascism is, is a right-wing, authoritarian movement that subordinates an individual to the group and tries to unify around either a nation or race by demonizing those who are different,” he said. French and Italian professor Clorinda Donato spoke on similarities and differences between former Italian Prime Minister Silvio Berlusconi and Trump, discussing among other issues their ideologies, background and relationship with women.

The final speaker was history professor Ali Igmen, who discussed the tools of 21st century authoritarian regimes. He said they include seeking control of the judiciary and silencing the opposition through libel lawsuits and election measures, such as restricting the right to vote.

The history professor began his talking by mentioning “confusing, if not alarming changes” in the U.S. since Trump’s election, but didn’t expand on what they specifically entail.

“So, final note of caution. These are all happening in our country,” Igmen said near the end of his talk.

Breakout discussions on the topics of “Is Trump fascist?,” “Authoritarianism disguised,” “What is fascism?,” “Trump and European Populists” and “Teachers and artists in an oppressed society” followed the faculty presentations.

“For him to be fascist, he would have to want to do away with American democracy, which he has not tried to do,” said Blutinger, adding that some of the president’s rhetoric shows the potential for fascism. However, Blutinger said Trump is a legitimate president who won the Electoral College “decisively.” He said Trump’s attacks on the media are disturbing, but added that in general, politicians don’t like the media.

During the discussion, students strayed away from offering their own opinions of whether Trump is a fascist. Instead, they asked the professor questions that in part touched on topics of nationalism versus fascism, why fascism is right-wing, and what students can do to prevent fascism.

Following the event, Wright, chair of the Political Science department, said the concept of the teach-ins came about at a lunch shortly after the election, which included several department chairs “feeling very disheartened and worried.”

She told The College Fix in an interview that the “Reclaiming Democracy” teach-in series is not specifically in response to Trump’s election win, but suggested his campaign launched its creation.

Freshman Chris Clark, who was one of the 100-plus attendees Wednesday, told The College Fix he found the teach-in interesting but was disappointing in what he saw as a leftist bias in the professors’ presentation.

“I was (disappointed), because I think fascist tendencies can apply on both sides. I don’t see a reason to demonize one side or the other because both are culpable in a sense,” said Clark, a freshman criminal justice major who said he identifies as an independent politically.

Jose Barrios said he attended the teach-in as part of an assignment for a women’s studies class. The sophomore student said he left Wednesday’s event knowing more about the topic, but remains neutral on whether Trump is a fascist.