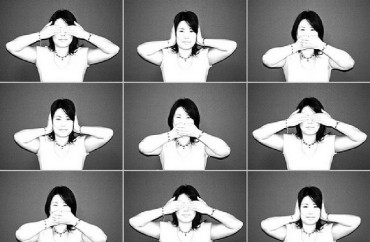 A student group at the Cornell law school sent a message to the whole student body that including a stereotypical meme about Asians.

The Cornell Daily Sun reported on the existence of the listserv message after the Black Law Student Association (BLSA) sent out an apology for the “offensive image” that was included in the email for an event it was sponsoring.

The image featured an Asian man singing karaoke, with the text “ABBA REE I CAN FRYYY,” the Sun said. That’s a reference to the R. Kelly song “I Believe I Can Fly.” Though the Sun did not publish the image, the independent Cornell Review tracked down what appears to be the same offending image. It’s not clear the original Feb. 22 message ever went beyond the virtual walls of the law school listserv, though the legal blog Above the Law published the same image as the Review in its report on the controversy.

On the heels of its student-sponsored event message with the Asian meme, the BLSA sent another email that said it would “like to formally apologize for an offensive image included in an earlier advertisement of a BLSA-sponsored event.”

It admitted the message “plays on hateful and racist stereotypes that are simply unacceptable” and that it was “deeply disappointed and embarrassed” by the email, which violated its mission of “fostering an inclusive environment.”

BLSA President Shamara Jones did not answer questions from The College Fix about who sent the listserv message, whether that person was disciplined or removed from the listserv role, who screens messages before they are sent and what other memes the BLSA has used. She simply provided The Fix the same statement the BLSA had previously released.

‘Not used out of malice’ but ‘could be found offensive’

The Asian Pacific American Law Student Association (APALSA) was quick to forgive its African-American peers for the racial slight.

In its own message to the listserv, the group called the BLSA’s apology “very considerate” and implied that the karaoke image wasn’t even inherently offensive.

“While the meme was not used out of malice, and people may have varying opinions on the image, it encompasses certain stereotypes that could be found offensive to members of our law school community,” APALSA wrote.

Thanks to everyone who joined BLSA and APALSA for our event titled “Candid Conversations at Cornell: Unconscious Bias.”

The Cornell Law administration does not appear to be taking any disciplinary action against the BLSA for the meme.

Though the meme “traded on offensive stereotypes about Asians that are utterly contrary to the culture and values” of the school, Law Dean Eduardo Peñalver said the administration was content to help the BLSA and APALSA with a joint event they were planning on “unconscious bias.”

He said the school “continue[s] to investigate the matter.” The law school did not respond to a Fix request for clarification on the results of that investigation.

HAPPENING NOW: Coffee Discussions on Harmful Stereotypes. Thanks to our outgoing 1L Reps for planning a great event! Bradley, Diane, Jenny, and Michael

Cornell Review Editor-in-Chief Casey Breznick told The Fix that he wasn’t aware of prior tensions between black and Asian students at the school, but he said Cornell has a past full of racial strife.

Not only did black students arm themselves and occupy a building in 1969 to protest campus racism and demand a black studies program, Breznick noted: Just two years ago, students complained about a “culturally insensitive” Cinco de Mayo-themed marketing campaign by the athletic department that featured sombreros and nachos.

The administration even told organizers: “Using stereotypes and other people’s cultures to market events is wrong.” The athletic department apologized and the school censored the marketing efforts.

“My first question was how did this get so far without anyone noticing that this could be hurtful to people on campus, people that are supposed to be part of this ‘inclusive’ community?” student Stephanie Martinez, who said she identified with Mexican culture, told the Sun at the time.

Breznick also noted that a Cornell-wide black student group released a list of demands last fall that included “mandatory, ongoing coursework for students and training for university employees” on “systems of power and privilege in the United States and centering the voices of oppressed people.”