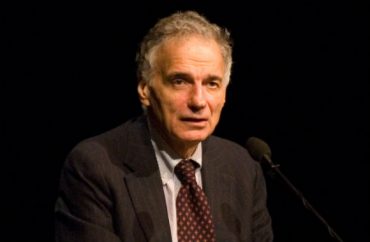 Ralph Nader has a bone to pick with coddled college students.

In a wide-ranging interview with Pacific Standard, the veteran third-party presidential candidate and consumer crusader connects the rise of Donald Trump with the increased sensitivity of the modern American campus.

Construction workers used to “stand on a corner and whistle at a pretty lady,” but now “they can’t do that anymore”:

They used ethnic jokes to reduce tension in the 1930s, ’40s, ’50s. And they’d laugh at each other’s jokes and hurl another one. But it still flows through ethnic America, you know. There are hundreds of things that people would like to say.

You see it on campuses — what is it called, trigger warnings? It’s gotten absurd. I mean, you repress people, you engage in anger, and what you do is turn people into skins that are blistered by moonbeams. Young men now are far too sensitive because they’ve never been in a draft. They’ve never had a sergeant say, “Hit the ground and do 50 push-ups and I don’t care if there’s mud there.”

MORE: Trump chalking is a ‘hate crime’ at Catholic university

He’s skeptical of this generation because of its smartphone addiction, which he blames for their “shorter attention spans” and avoidance of voice conversations (because “they’re too sensitive”), and its love of navel-gazing online activism:

You get petitions — but now they’re totally drowning in petitions, you know, over at Change.org. You can’t even get crowdsourcing much anymore, because the clutter defeats its original utility, so it devours itself.

And he sees a familiar end for the new breed of race-activism digerati:

Yeah, but how far does Black Lives Matter go? Is it raising money for offices and permanent staff? It’s like Occupy Wall Street. They had the same technology. It gets you to first base, and it doesn’t get you further. …