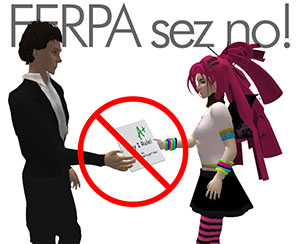 Press freedom advocates often hound higher education officials for hiding behind a student privacy law to cover up their own wrongdoing or incompetence.

That’s the substance of a friend-of-the-court brief by the Student Press Law Center and other advocates. They are asking the Montana Supreme Court to force the state to turn over records that explain why its higher education commissioner overturned disciplinary sanctions against a University of Montana football player.

The same misuse of the Family Educational Rights and Privacy Act is at play in an ongoing dispute between Baylor University’s student newspaper, The Lariat, and its student court, which ludicrously tried to stop reporters from even contacting sources in a dispute.

The Student Press Law Center reports that Chief Justice Cody Coll told photographers and a reporter they couldn’t photograph or record a hearing last week because it would violate FERPA. That contradicts 20-year-old regulatory guidance from the Department of Education.

Occasionally, though, a college uses FERPA correctly – and catches hell for it.

The University of Oregon is countersuing a student who claims the school and men’s basketball coach violated her Title IX rights through their handling of her sexual-assault allegations against three former players. The point-by-point counterclaim seeks the dismissal of the student’s “frivolous” lawsuit and recovery of legal fees “from either the alleged victim or her attorneys,” The Oregonian reports.

That seriously pissed off some people who are demanding via petition that the University of Oregon “stop suing rape survivors.” They claim the school violated FERPA by obtaining the accuser’s “counseling records from the plaintiff’s sessions at the university health center,” as the Daily Emerald reported.

According to the Student Press Law Center’s FERPA Fact project, the school’s explanation for getting her records – which it claims not to have read – is “probably valid”:

Here’s the thing. When health care is being provided because of someone’s status as a student, those records are covered by FERPA and not [the Health Insurance Portability and Accountability Act]. So we can move on from that issue right away.

It would be a neat trick to have the files disclosed to the court without their attorneys being involved. And if these are education records covered by FERPA and not HIPAA — which, evidently, they are at present — then they’re relevant to the emotional state of the plaintiff. Since emotional distress is one of the claims, the content is probably relevant to the claim.

For example, if the student plaintiff was suing her doctor for malpractice because she alleged that she couldn’t walk after a surgical procedure, the doctor would be just as entitled to disclose her medical files to the court in order to demonstrate the validity of the care provided or the absence of a disability.

This is just the latest variant of the typical strategy employed by activists – and, increasingly, gutless administrators under threat from lawless bureaucrats – who make a sham of the campus disciplinary process by denying due process to accused students.

They demand that students facing expulsion, no-contact orders that wreak havoc with their academic schedules, and lifelong tarring as rapists not be allowed to present exculpatory evidence, cross-examine witnesses or even act rationally without incriminating themselves.

Certainly the University of Oregon, which holds accused students to a weak evidence standard and limits their defense options, is not itself a terribly sympathetic defendant.

But it deserves the chance to vigorously defend itself the same as a thief, murderer or, God forbid, 19-year-old who thought his partner was enthusiastically consensual.