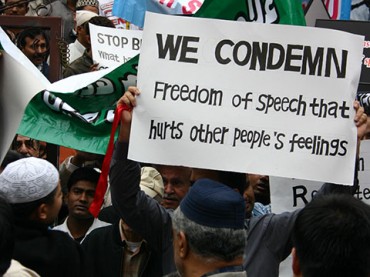 Editor’s note: Below is a satirical column penned by University of Michigan student Omar Mahmood, who writes for both the mainstream campus newspaper The Michigan Daily and the conservative independent publication the Michigan Review. Or at least he did.

After his column was published last week, Mahmood tells The College Fix: “I received a call from the editorial editor [of the Daily] telling me that I had created a ‘hostile environment’ among the editorial staff and that someone had felt threatened because of what I had written … The issue had been taken to the editor in chief who procured a bylaw by which I was given an ultimatum to leave the Review or leave the Daily within a week. I was not allowed to know the name of the offended individuals.” He added the newspaper’s leaders are “forcing me to write a letter of apology as a condition for staying on the Daily” and suspended his regular column in the Daily. Mahmood has written for both the Review and the Daily concurrently for this fall semester, but after this controversial column was published the Daily’s editors decided “Mr. Mahmood’s involvement with the Michigan Review presents a conflict of interest. Our bylaws say that once a determination is made that a conflict of interest exists, the person in question will have one week to resign from either the Daily or the organization causing the conflict of interest,” according to a statement from the Daily to The College Fix.

Without further ado, we present to you “Do The Left Thing” by Omar Mahmood:

It was one of the coldest days of this winter past, and I was hurrying along the Diag to class. The blistering cold did not turn my eyes from all the white privilege falling around [me]. All those white snowflakes falling thick upon the autumn leaves, burying their colors. Majoring in womyn’s studies, I’ve learned that oppression comes in many forms. Sometimes we fail to notice it because it’s just everywhere – just like that white snow. As I walked, I slipped on a patch of wet leaves lining the steps of the Hatcher, and I fell forward headfirst onto the steps of the library. If it hadn’t been for the left hand that I thrust out right before my fall, I would have ended up just another statistic in the war on colored people. As it were, a white cis-gendered hetero upper-class man came down the steps just as I was falling. He looked at me with that white man’s burden face that I see too often on this racialized campus.

Behind his words I sensed a patronizing sneer, as if he expected me to be a spokespersyn for my whole race. He offered his hand to help me up, and I thought to myself how this might be a manifestation of the patriarchy patronizing me. I doubt he would’ve said those violent words had I been white, but he would take any opportunity to patronize a colored [email protected] or womyn. People on this campus always box others in based on race. Triggered, I waved his hand aside and got up of my own accord.

He was taken aback. Suddenly I felt I was taking back some of that lost agency that colonialism had robbed my people of. I felt like Aamir Khan in Lagaan. That’s right, that white man wasn’t about to tax me. I didn’t even want to be that white. I turned on my heels and showed him my back.

He shouted after me, “I was just trying to do the right thing!”

The right thing… The right thing… I became so aware at that moment of the left hand that I had thrust out before falling, and suddenly my humanity was reduced to my handydnyss. The words rang in my eardrums, and my blood throbbed. This was the microaggression that broke the gender-neutral camel’s back. But unlike other microaggressions, this one triggered a shift in my worldview. All this while, I had been obsessed only with the color on this campus. All of a sudden, though, that became a side issue. All those race-based microaggressions now seemed trivial. I had, I realized, forgotten to think intersectionally.

The biggest obstacle to equality today is our barbaric attitude toward people of left-handydnyss. It’s a tragedy that I, a member of the left-handed community, had little to no idea of the atrocious persecution that we are dealt every day by institutions that are deeply embedded in society. So deeply embedded, and so ever-present, that we don’t even notice them.

But then I think to the word sinister. In our English, it means evil. But that’s because it used to mean left-handed in the Latin, and left-handyd people, especially those of color, were considered evil. In organic chemistry, we are taught R and S distinctions. I realize now that whenever we came across a left-handyd enantiomer in the coursepack, I could just feel the patronizing gaze of the right-handed members of the class on the back of my neck. And now I finally understand why.

And the University of Michigan does literally nothing to combat the countless instances of violence we encounter every day. Whenever I walk into a classroom, I can hardly find a left-handyd desk to sit in. In big lecture halls, I’m met with countless stares as I walk up the aisle along the left-handyd column. The University cannot claim to be my school while it continues to oppress me. We need to find allies with other minority groups and work against the establishment. This campus must be at the forefront of progress in America.

Yes, our president might be left-handyd. But that does not represent the pathetic living conditions of so many left-handyd people around the world, and even here in the United States, who are constantly threatened simply because they write or eat with a different hand. Even today, left-handyd [email protected] are paid 68 cents to the dollar that right-handed individuals are paid.

It is 2014, people. Still, change starts with awareness. Until right-handed people, especially cis-gendered hetero white males in salmon shorts, do not start checking their privilege, we will continue to live in inequality.

No longer will I persevere in patience. No longer will I suffer in silence. I am a left-handyd [email protected], and my humanity needs be respected! The next time someone tells you to Do the right thing! turn around and flick them off with your left middle finger.

Do the left thing.

Omar Mahmood can be reached at [email protected]