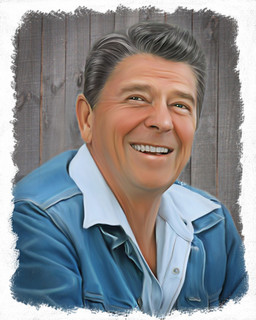 The wit and wisdom of President Ronald Reagan never – ever – gets old.

Newly released and previously unknown details of how the then-Governor of California handled college protestors has been published upon the recent death of William P. Clark, a close Reagan advisor, among other things. Clark gave his testimony to the Presidential Oral History program of the Miller Center at the University of Virginia.

Steven Hayward on the Power Line blog posted some of Clark’s remarks, and here are some highlights related to Reagan v. College Protestors.

To set the stage, it was the late 1960s, and Reagan was scheduled for a meeting in Oregon on a Saturday when he got wind of student protestors upset over tuition-related issues. The students planned a rally at the state capitol in Sacramento. Reagan decided to cancel his trip north and crash the party, Clark recalled:

… it was a cold, foggy morning and he said, “Let me know when they’re out there.” I said, “Yes, Governor, we will. Are you sure you want to go out there? These people are quite angry. They were even discussing the possibility of tuition at the UC campuses.” And he said, “Oh, yes, we have to do this.”

So we could hear the shouting and the leader speaking to them from the steps of the Capitol. And he went to the north end of the building and he said, “Bill, isn’t it time that we walk on down the hall and join them?” I said, “Governor, if you insist, we will.” So we walked through the double doors to the steps where this man was carrying on, I think he was a student leader. He of course couldn’t see us approach, his back would be to us as we went out the doors, but this vast crowd suddenly spotted the Governor himself and shocked faces told the speaker that something was going on behind him.

He turned around and saw the Governor and in shock just handed him the mike as a matter of courtesy. He was stunned, and the Governor of course in a very few minutes had the—maybe not the group in his hand by any means, but gave a rational explanation as to different options but no decisions being made and expressed he was glad to see them this morning. He effectively won the day. …

Anyway, several of us fanned out to different campuses to explain the tuition issue. He did go aboard the campuses at several junctures. Again, he was always well received. I recall the first time we went onto the UC campus at Berkeley, he was very quiet, studying the scene and this one particular group of poorly dressed, straggly, we were not sure they were students, beards and long hair on the men and one carrying a sign, “Make love, not war.” The Governor leaned over and he said, “Bill, do you think they’re capable of either?” I didn’t answer. [laughter]

LOL. Good one, President Reagan. We miss you.