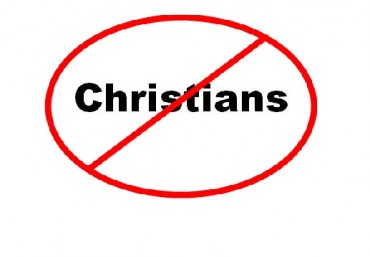 When Cal Poly Sal Luis Obispo hosts its annual Open House this April, during which campus clubs typically greet and recruit prospective visiting students, one longtime mainstay at the university will be conspicuously absent: Cru.

Gone are the days when Christian student clubs at Cal Poly Sal Luis Obispo, Chico State – and the other 21 Cal State universities across California – are allowed to set up shop in the quad and recruit.

They’ve been scrubbed from campus websites and directories. They cannot take part in events that help campus clubs recruit new members and gain visibility. They are charged a more expensive, outsider fee to rent rooms on campus – straining their already tight coffers. They’ve lost a chance to receive a portion of student fees collected to help clubs on campuses thrive.

All these changes have hurt.

For Cru – one of three Christian clubs derecognized from Cal Poly and Chico State’s campuses this school year – participation has dwindled or outright plunged.

And Greg Jao, InterVarsity Christian Fellowship’s national field director, told The College Fix that Chico State’s chapter – one of the bigger InterVarsity chapters – lost 50 members due to the new policy.

At Cal Poly, Cru can no longer reserve a room on campus as an organization, and must reserve rooms as an outside organization. That cost went from Josh Otto, Chico State’s Cru director, told The College Fix that the cost for them to reserve a room went from being for free for the entire year to $900 for one-time use.

To save money because renting rooms on campus is now so expensive, some clubs have moved many of their events off campus – but it’s proving to be a deterrent for the college crowd wanting an easy, convenient place to meet with like-minded peers.

“The effects of [the policy] severely reduced the ability of Christians and other religions on campus to practice their faith and be an integral part of the CSU community,” said engineering senior Matt Susank. “Not only does that speak against the mission at Cal Poly but of higher education and it is in a way discriminatory towards our ability to do that which is a huge part of campus life.”

Susank, who is affiliated with the Newman Catholic Center, is among a group of students at Cal Poly San Luis Obispo leading a campaign to revamp the new policy.

Clubs such as the Muslim Students Association, Cru, InterVarsity and the Newman Catholic Center were among dozens represented at the Nov. 15 California State Student Association meeting at Cal Poly to speak out against the new policy.

“We talked during open forum to bring this issue in front of the representatives,” Susank said. “There were quite a number of campuses that were concerned and contacted us, as well as some campuses that were already working on this issue and have found ways to move forward and were offering to work with us as well.”

A matter of principle

Essentially, Christian campus clubs are not willing to back down on this.

Leaders of Cru, formerly known as Campus Crusade for Christ, as well as the two other Christian clubs at San Luis Obispo that were derecognized – “We have no issue with anybody of any kind of race, religion coming to our weekly meetings and being a part of who we are,” San Luis Obispo Missionary Leader Jamey Pappas said. “It’s a question of who’s going to be leading our students in a Bible Study, mentoring them individually, or deciding what kind of content goes into our weekly meeting, and we want people who agree with what we’re about.”

Chico State’s Otto told The College Fix to stay instated they would have had to change their constitution and check boxes saying they agree with the new all-comers policy, titled “Executive Order 1068.”

“As a faith-based organization, there are things within our constitution that we feel strongly in order to preserve our message and in order to do what we feel called to do,” Otto said. “Our leaders have to not only be able to execute these roles, but also live them out in certain ways.”

For other Christian organizations, they receive outside funding that would be taken away if these organizations were to allow non-Christians be club leaders.

Priced out, shunned from campuses as enforcement kicks in

While Pappas said he anticipated Cru would be derecognized this school year, he didn’t find out until he saw the director of student clubs peeking into one of their staff meetings in the University Union on Oct. 13.

“I could see him looking at us with a look on his face like, ‘Huh, what’s going on?’” Pappas said. “I went into his office knowing what was going to happen since we already indicated that we weren’t going to sign the policy. It was then that he said, basically, ‘You guys have been derecognized from campus.’ ”

Pappas said he doesn’t blame Cal Poly – but rather CSU administrators’ decision to interpret the policy in such a way that finds Christians club discriminatory. But it’s still hitting them hard.

“It seemed like there’s less availability because we are a lower priority when it comes to making those reservations,” Pappas said. “Campus organizations and what not have a higher priority. Selection is limited, and cost is high.”

At Chico, the Cru chapter used to receive $1,000 in funding from student government when they were recognized on campus. They will no longer receive that funding.

“If we try to use campus facilities, the costs are just way too prohibitive,” Otto said. “We’re just not able to do quite as much.”

Forging ahead, an uphill battle

Shipp told The College Fix the effects are visible.

“Two of my roommates are Bible Study leaders of Cru and they each have between ten and fifteen students that they are working with,” Shipp said. “Last week, Melanie Reis had no one show up to her Bible Study. Sarah Sampson only had two girls.”

According to Shipp, at least two to three clubs on campus – who requested not to be named out of fear of political fallout – were forced to agree to the new policy just so they could have a place to meet.

“They have to put their heads down because they have nowhere else to go,” Shipp said.

According to Ron Sanders, a campus field ministry coach for San Francisco Bay Area Cru chapters, some campuses have administrators that are less strict about enforcing the policy than at others – but technically they all are subject to the regulations regardless.

The big event this year for Chico’s Cru chapter is their 5k run to raise awareness for human sex trafficking. The event is set for Feb. 28, and while they can still host the event on campus, they are having trouble finding campus clubs to partner with.

“At least one specific club said, ‘We can’t partner with you because you’re not an official club,’” Otto said, adding other clubs they did partner with did not let them sit at their table in the quad and pass out promotional fliers.

This is the second year Chico State’s Cru has done the 5k run, but this year the fundraiser may have less attendance, and less money raised.

Making matters worse, Chico Cru also suffered a drop in attendance since they had to move their weekly meetings to a church seven blocks away from campus. Most of the losses were due to freshmen being unable to go to the meetings off-campus.

Sanders told The College Fix that Cru is currently in talks with the CSU administrators to find a solution that is acceptable to both the system and religious organizations.

“So far the conversations have been pretty positive,” Sanders said. “There’s a lot of legal language you have to go through and how you posture yourself on-campus and those kinds of things that are getting worked out.”

Jao said that InterVaristy has been talking to other religious organizations to mobilize opposition to Executive Order 1068. The group has also been in talks with the CSU chancellor’s office, which believes that they’re simply enforcing state law. “We don’t believe it is (enforcing state law), but if they believe so then let’s change the law,” Jao said. “It would actually achieve their goals of bringing more diversity to campus, it would return us to the status quo, and best of all it would cost taxpayers nothing.”

The Chico State Cru chapter isn’t focused on fighting back as much as it is trying to focus on how to adapt to the new policy.

“This gives us a unique opportunity to speak into and having conversations with the campus where giving back and being a blessing in this season is more significant and needed than fighting back,” Otto said, adding he would still support a full repeal or a modification of the executive order.

Pappas, San Luis Obispo’s missionary leader, said he hopes to work out a compromise with the CSU chancellor.

Shipp said that their goal isn’t necessarily to allow clubs to restrict membership, but to be able to choose their own leaders.

“The tagline we’re trying to use is ‘Open Membership, Qualified Leadership,’” Shipp said. “Your conduct is a reflection of what you believe. If we can’t hold our leaders accountable for their conduct, we can’t be a good representation of our culture.”

Currently, Cal Poly’s Associated Students, Inc. is drafting a resolution that, if passed, would then go to the California State Students Association. The group would then vote to declare its opposition to the new policy, and then the CSU leadership would have to decide if they want to change its implementation.

“Cal Poly was basically chosen to be the campus that would take it through their student government,” Shipp said. “People came back from that meeting and told me, ‘The world’s looking at us.’ ”